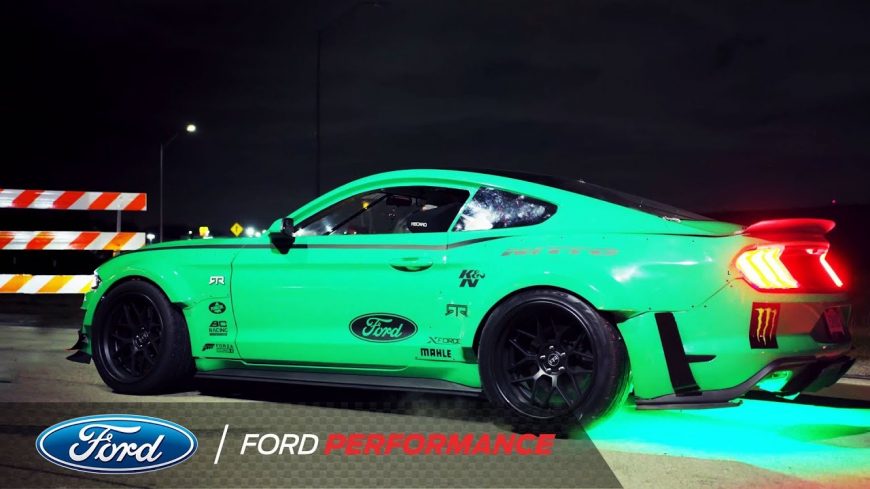 You can stop internetting for the day, you’ve officially found the coolest thing you’re going to see today, I can all but guarantee it. If you think I’m wrong, just go ahead and scroll on down and hit the play button and watch for yourself.

What you’re about to see is drift expert Vaughn Gittin Jr doing what he does best, and drifting a 900 HP Ford Mustang around all four leaves of a cloverleaf interchange on an undisclosed section of interstate highway. We’ve all seen these interchanges, but I doubt any of us have ever taken the massive, sweeping loops in this fashion.

Don’t get me wrong, I’ve certainly seen plenty of footage of cars drifting around off- and on-ramp loops, but only one individual leaf, not all four. In true Gittin fashion, that’s just a warm up for him to make sure he’s got a feel for the car as he hits the other three looping interchanges to complete the cloverleaf.

The car itself, appropriately slathered in green as this weekend was St. Paddy’s Day, is the same Mustang that Gittin used to drift the Nurburgring in his last major epic video. With 900 horsepower on tap and Gittin’s decades of experience, this is the perfect combination of man and machine to knock out this awesome stunt. I have to say that the sound this car makes, between the screaming tires and the perfect exhaust note, is what gearhead wet dreams are made of.

It’s worth noting that we aren’t in any way encouraging others to try this. Just because I called you guys out for not having done it before doesn’t mean I think you should go try it. Gittin and the production crew had the help of the authorities to shut down the interstate and make sure traffic wouldn’t interfere with the stunt, and that’s kind of an important factor when doing something like this.