In this day and age, politics is really a hot button topic. Don’t get me wrong, ...

In this day and age, politics is really a hot button topic. Don’t get me wrong, getting into a political discussion has always been a way to sit on the hot seat but today, it really seems like people will become easily enraged by things that they see to be incorrect on their political spectrum.

This time, we check out a crazy scene as the presidential motorcade comes rolling down the street with tons of people headed out to the roadways to spectate and experience exactly what something like this is all about. However, one bystander wasn’t about to stay on the sidelines as they plummeted out of the woods in their car, appearing to be veering straight towards the motorcade. However, it looks like the operator behind the wheel here managed to find their way into a  giant ditch that was in front of the woods instead before being approached by authorities. At 20,000 pounds with 8-inch thick armor plating, it probably wouldn’t have made a difference if the car collided with “The Beast,” as the limo is known, anyway.

Follow along in the video below that was either one incredibly moronic move or a mistake that has been taken incredibly out of context. Via twitter, the police on the scene reported that the brakes in the car failed to make all of this unfold and that’s the reason why this obscure incident happened, a massive coincidence to say the least. We will let you observe the video below so that you can tell us what you think of the incident. 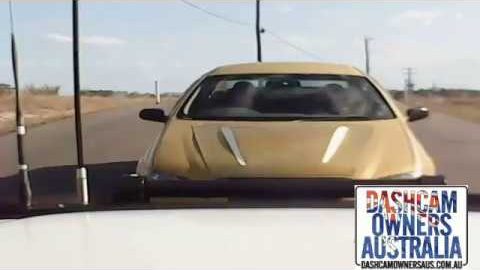