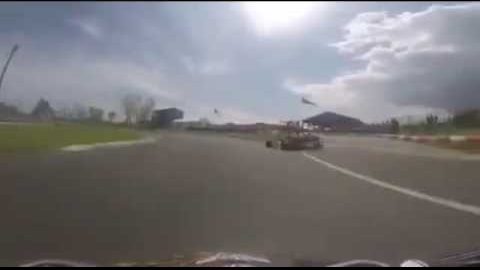 There is something that could really be said about the adrenaline rush that you can get behind the wheel of some high-speed go-karts as you get into quite the competition with your buddies and really make magic happen out there. For that span of time, it almost seems like you’re immersed entirely in the moment and nothing else can really phase you, meaning that you’re in it to win it as you lay into that throttle and try and beat your friends around the track and go home with the best time and hopefully, first place!

This time, however, we check out competition that might have just gone a touch too far as one individual somehow ends up pulling off a maneuver that’s unlike very many that we have ever seen before. No, it’s not just an aggressive pass as the kart goes around the other on the outside of a turn but instead, we get to see an amazing clip as an onboard camera captures the action when some craziness unfolds above the go-kart driver in question. Insteda of making an aggressive pass around the kart in question, this time, we watch as one pretty aggressive driver somehow manages to launch right over the top!

If you follow along with the video below and wait for a little bit, you’ll be able to see one the craziest go-karting maneuvers that you will ever lay eyes on, hands-down. It’s really hard not to curl a little bit inside as you watch this as it had to be quite a nervous moment for both of the drivers involved here. Personally, I had to watch this one a couple of times with my own two eyes just to make sure that it was, in fact, reality unfolding in front of us because this just seems to be such an unbelievable instance coming to life.

« When Their Biggest Rival Is Coming To Town, Bama Pulls Out All The Stops To Dry The Field