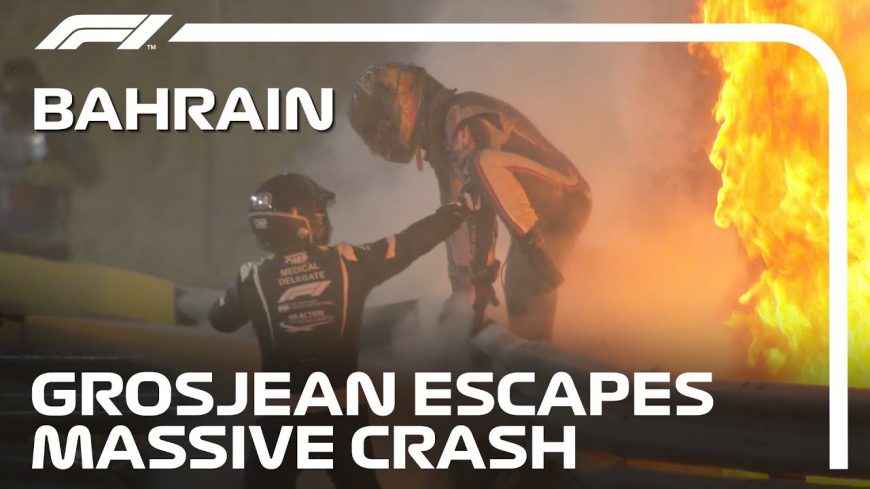 After watching this wreck, it might be hard to believe, but the driver involved managed to walk away from the incident.

Romain Grosjean is a very lucky man following an incident on just the first lap of Formula One’s Bahrain Grand Prix on Sunday. No racer wants to be involved in a crash. However, this particular situation would unfold like the worst nightmare imaginable.

Fans would watch the race get underway as Grosjean’s car would get away from him shortly after the start. As the car accelerated at a high rate of speed, it would eventually hit a barrier, blasting through the barrier before being ripped in half. That alone could prove to be an incident that would be tough to walk away from. However, things only escalated from there as the car went up in a glowing ball of fire following the wreck.

Thankfully, though, almost looking like an action movie hero, Grosjean would emerge from the flames. Managing to stay in the state of mind to be able to find one’s way out of such a situation is impressive in and of itself. We could only imagine that such a scenario could prove to be incredibly disorienting if not throwing an entire blackout in the driver’s direction.

Following the incident, it seems as if the extent of the injuries were some burns on Grosjean’s hands and ankles.

There aren’t too many people who can say that they have ripped a Formula One car completely in half before setting it on fire and living to talk about it. Even though this is a club that we think most racers would probably like to avoid, Romain Grosjean probably feels fortunate to have his membership card.

Below, we see the incident from a variety of different angles as it built up quite the level of panic before the wave of relief that would come when the driver emerged from the ball of fire.

« Following Jeremy Clarkson’s Goodbye, We Learn of “A Massive Hunt” (Trailer Inside)