What Happens if you Fill up a Gas Tank with Bleach?

What Happens if you Fill up a Gas Tank with Bleach?

If you follow along with certain YouTube channels, you know that their main goal in their presentation is to go forth and destroy as many things as possible, some of the channels have a regular topic that they stick to and others, well, they just like to destroy a little bit of everything. This time, we catch up with the TechRax YouTube channel that has become known for destroying none other than automobiles in a whole bunch of different creative ways that really make you wonder if someone here is off of the rocker a little bit.

This time, we get the scene as none other than an Infiniti, a little bit of a change out from their usual repertoire of blowing up BMWs, steps up to the plate for a bit of a test. However, the name of the game is pretty similar as they dump a foreign chemical into the gas tank to see just how the vehicle will be able to handle it all. After trying different mixtures in the gas tank, this time, it’s quite an obscure one as they decide to chase down the opportunity to dump both bleach and motor oil in to see what comes of it. The results actually ended up surprising those putting on the experiment quite a bit.

In this one, we tune in and watch with our eyes glued to the screen as the car actually does a pretty good job of withstanding the beating that it’s getting thanks to these liquids that probably shouldn’t be in anybody’s gas tank. Even though it withstands the concoction for a little while, actually longer than we had anticipated, it isn’t long before the car eventually fails to function with this mix of liquids squirting out of the fuel injectors and through the rest of the fuel system. If you follow along down below, be sure to tell us exactly why it is that you think that the car lasted this long. All logic says that maybe it should’ve died a little bit sooner. Perhaps the quarter tank of gas left in the car had a little something to do with it.

What Happens If You Put DIESEL in a Lamborghini? (Don’t Try This!) 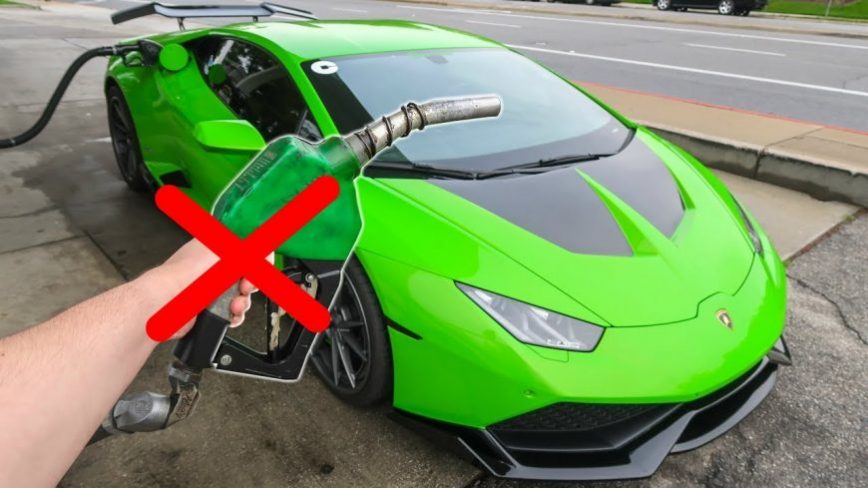