What Happens When You Put Tiny Car Wheels on a Big Diesel Truck?

What Happens When You Put Tiny Car Wheels on a Big Diesel Truck?

Sometimes, we find ourselves lost in the long strings of searches on YouTube videos ...

Sometimes, we find ourselves lost in the long strings of searches on YouTube videos and before we know it, it’s easy to get to a point where we’re checking out a video without having any idea how we got there. This is something that pretty much everybody who has spent a substantial amount of time on YouTube has probably come across at one point or another. Sometimes, it might even end up where the viewer learns a new thing or two but other times, they’ll end up in that strange part of YouTube where people will probably start judging if weren’t for a coherent explanation as to how one ended up watching some of the strange videos that reside within.

This time, we check out a YouTube experiment that certainly falls into the latter. There is no rhyme or reason as to why a video like this was created for any kind of discernible goal but it’s one of those that we just couldn’t help but click on and find out what was going to happen. It’s probably exactly what the creator wanted and we fell straight into the trap but when we got there, we were oddly delighted that we had joined in. After all, how else would we get our fill of all of these experiments that we never knew we wanted until we saw them unfold? This one really falls in the category of an experiment that nobody probably wanted or needed but really draws in the viewers anyway.

For those who have caught the Bug Bmx YouTube channel, they have probably become familiarized with some of these experiments. This time, the experiment in question that puts his Dodge Ram through yet another strenuous task is that of taking the wheels off and replacing them with the smallest possible wheel and tire package that he can find. This certainly isn’t something that we would recommend trying for anybody who might be thinking of doing it. 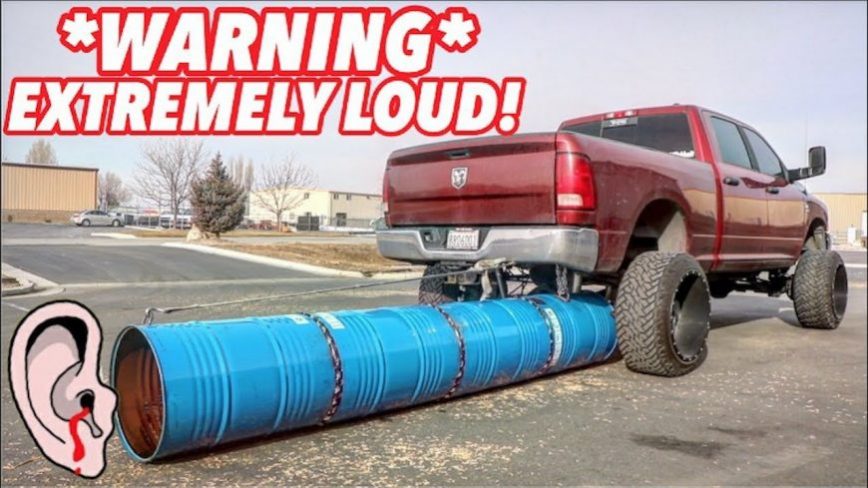