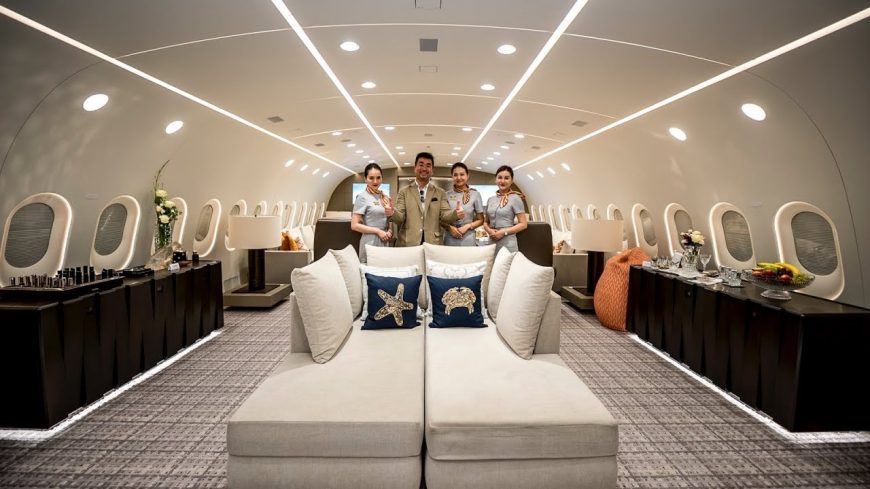 When taking a moment to consideer those who are wealthy beyond the norm, there is a certainly a distinct breakdown between those who can live well and those who have money to do with whatever they please. Sure, maybe grabbing a luxury car that’s the envy of the neighborhood is a good feeling but just imagine being able to buy the entire neighborhood. This time, we present just the right airplane for those folks who would prefer the entire block to just one house. This thing really is all that and a bag of chips as the endless amenities present a situation that most won’t even find in their own homes.

One look at the name here should be taken incredibly literally as this thing really encompasses the title of the Boeing 787 Dreamliner with extra Emphasis on the “dream” part. I guess that one could say that this thing offers up all of the luxuries of a five-star hotel but when we get to take a chance to take a tour through the airplane, that might be a little bit insulting as it doesn’t even begin to cover exactly what the owner gets when stepping between those wings. In fact, this is the only 787 Dreamliner, an aircraft that is used to housing over 300 occupants commercially, to be transformed into a private vessel.

By following along in the video down below, we’re able to get the tour from top to bottom, showing exactly what an airplane like this has to offer. We’re hard-pressed to say that we have ever seen anything of this capacity before this as it offers everything from electronics, to top-notch furniture, and even seating for guests!

After taking a ride through this marvel of air transportation, be sure to tell us what you think of the tour and what features, if any, you would add to this home in the sky. We would be pretty hard pressed to suggest ways to make the magnificent plane any more top notch!