What’s Faster an Automatic or Manual Hellcat? Watch This Drag Race to Find Out 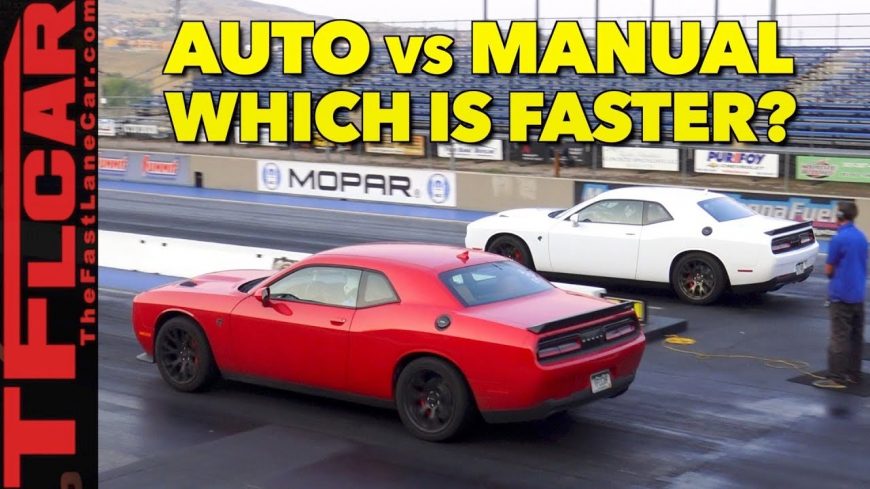 It’s a debate that’s raged for years among gearheads from coast to coast and around the world: automatic or manual? For years, in the real of stock and lightly modified cars, the manual was the king, as factory automatic transmissions were sluggish and robbed too much horsepower compared to their manually-shifted counterparts. However, when GM introduced the LT1 engine in its rear wheel drive sports car, it also took a good hard look at the transmission situation and updated the decade-old 700R4 transmission to an electronically-controlled version called the 4L60E.

I’m not going to get into the technical side of things, mainly because transmissions seem to be more akin to wizardry than actual car parts to my brain, and me trying to explain it would be like my 14-year-old son trying to explain girls.

So just know, in the mid-90’s, things began to shift in the favor of the slushbox, and as technology has advanced, the manual has sort of been left in the dust, as there isn’t really much to be done to improve something the relies on the driver’s physical input to function. However, there are few that will debate the raw, undeniable joy of slamming gears in a straight shift, feeling like you’re literally a part of the drive train as you feel the vibrations from the engine through the shifter, connecting you directly to the car in a way an automatic never could.

But, in a world that revolves around performance, whichever is quicker ultimately rules the day, and as you will see in this video, that’s going to be the automatic, and that’s not likely to change anytime soon. That doesn’t mean you shouldn’t buy a manual, as they truly are a joy to drive, especially for a daily driver. However, for a car that will see a lot of time on the track, we have to tip out hat the way of the auto.