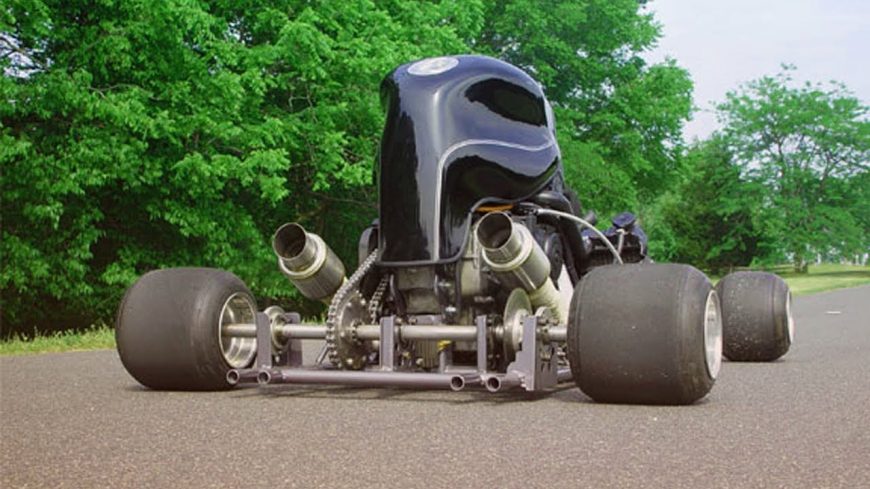 Our world is full of engine swaps. It’s actually more common to see a fox body Mustang with a GM LS engine between the fenders than the iconic 5.0 liter V8 that came in them from the factory.  Engine swaps are nothin new, for sure, but there are still some that are just downright mind-blowing, either for their uniqueness or their absolute absurdity. This video is full of the latter; swaps that are only done because they CAN, and most certainly not because they should. And we are completely okay with that!

This video kicks off with one of the most ridiculous things I’ve ever seen personally, a shifter kart with a 600cc Kawasaki Ninja engine that looks like it would absolutely be the most dangerous contraption ever built if it ever got enough traction to reach the terrifying speeds it should be capable of. Up next, a different approach to the same concept: a snarling small block Chevy stuffed in the nose of a Polaris snowmobile. This too seems incredibly sketchy, but a lot of fun as long as you keep the shiny side up and don’t plunge through the ice due to the added weight on the nose.

The next featured ride isn’t so much about the engine swap as it is about the absurdly tall wheels and tires. I can’t even impinge where they found the tires for this thing, but the Bigfoot clone looks to be so tall it would tangle with the power lines if the driver wasn’t careful. That is followed by the one ride on this list I would most like to get my hands on, a 109 MPH jetski that looks like an absolute blast to drive.

There are a few more rides to check out, but I don’t want to spoil the fun, so to see what else is featured, you’ll have to hit that play button below and check it out for yourself!