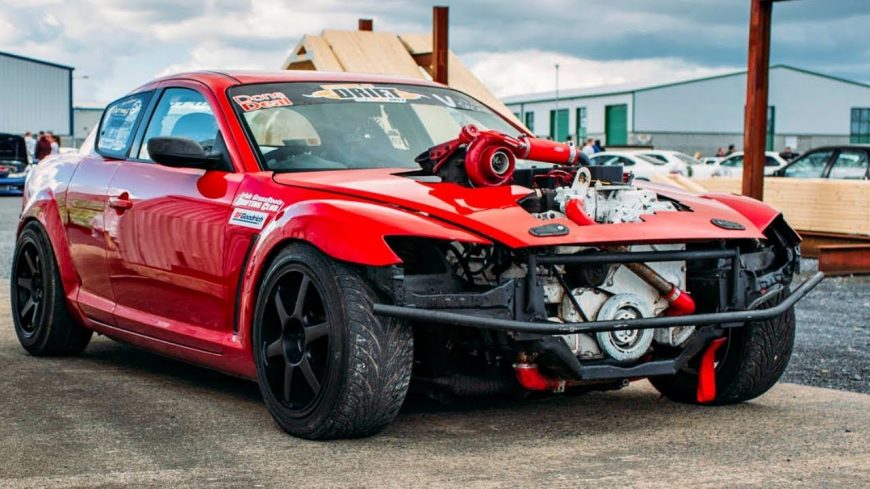 We’ve seen plenty of insane engine swaps, but when it comes to improbability, but we have to give these guys props for coming up with these insane ideas and having the creativity and skills to pull them off. None of these are simple drop-ins with kits readily available, so each of the builds you’re about to see took some real time and engineering to pull off.

The first car in the video is definitely one of the most unlikely swaps you’ll ever see, because not too many people are going to pull the vaunted RB-series engine out and swap it for, well, anything. However, he owner of this Skyline decided to do just that, swapping in a torquey, smoke-rolling Powerstroke diesel instead. And surprisingly enough, it works great for drifting. Later in the video, there’s another unlikely diesel swap, with a 5.9 Cummins being crammed most of the way under the hood of a Mazda RX8. After that, a Cummins swap in a Nissan 240SX that has actually been around a while, but still grabs our attention every time.

After that, another swap that is just completely unexpected, blending quite literally one of the oldest cars in existence, the Ford Model A, with one of the most beloved engines of all time, the Toyota 2JZ-GTE. With a big turbine hung off the side, we can only assume this thing is ridiculously fast considering the Model A is a fairly lightweight ride.

I’m not going to spoil the rest of the swaps, you have to hit the play button and watch for yourself to find out just how crazy these guys can get. Just know, there’s a tank engine, a Citroen, and a Hayabusa engine all crammed into one video, and there’s plenty more too. Go ahead and watch, then tell us on our Facebook page what engine and chassis you’d swap!

« The Biggest Pileup in GT History Is Painful To Watch… How Much Money In Damages?