Whcih is Faster At The Drag Strip? Hellcat or Trackhawk? 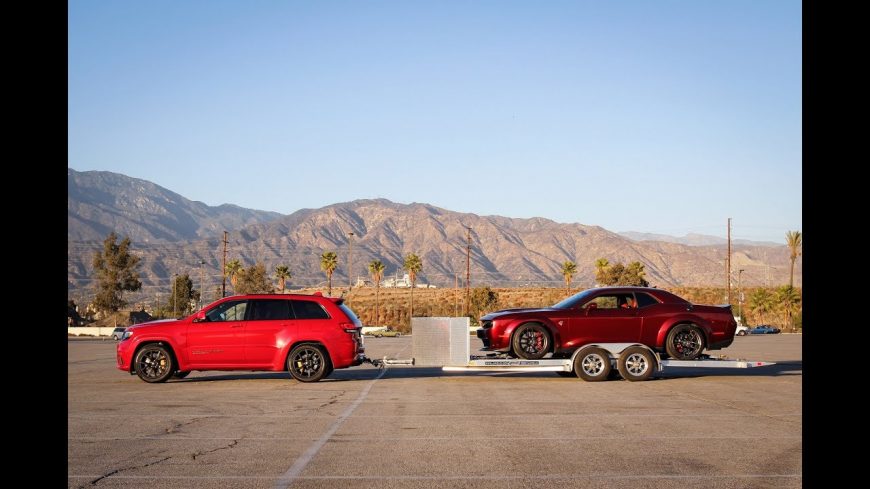 As soon as it was confirmed to be all-wheel drive, it was suspected that the Jeep Grand Cherokee Trackhawk might be quicker on the track than its coupe cousin, the Hellcat Challenger. Both of them are powered by the supercharged 707 horsepower 6.2 Liter HEMI, and while the Challenger is considerably lighter, it is notoriously wheelspin-happy thanks to the gobs of bottom end grunt produced by the blown powerplant.

The Trackhawk SUV, on the other hand, has no traction issues at all thanks to its AWD system, giving it a decided advantage over the Challenger – even the Widebody Hellcat that has wider rear tires from the factory than previous versions – when it comes to launching hard at the drag strip.

The guys from HOT ROD Network decided to see if it was possible to tow a car to the track, then outrun said car with the tow vehicle itself, and these two rides are the perfect duo to check this theory out since they’re basically first cousins that share so many characteristics. They take a quick tour of each ride, touching on the price and interior comfort and amenities before heading to retrieve the trailer and load up for a night at the track.

With the Widebody Hellcat loaded up, they head out to the track, where they line up and find out that, as suspected, the AWD system is a huge difference maker on the track, with the Trackhawk planting all four tires with no drama, while the Challenger struggles to find traction off the line. This gives the Jeep a sizable lead that the Challenger just cannot makeup, at least no through the 1/8th mile.

If this had been a quarter mile track, it’s almost certain that the Challenger, which had several MPH over the Jeep in 1/8th mile trap speed, would have overtaken the Trackhawk before the finish line, but if you look at this from the other angle, if you’re going to be racing on the street – which is dangerous and illegal and a terrible idea – then this Jeep is going to be lethal, making it quite possibly the first ever six-figure sleeper.

« Elon Musk Successfully Sends His Own Tesla Roadster Into Space!