Who Needs Headlights When You Have TWIN TURBOS!? LSX Buick Spools to Life 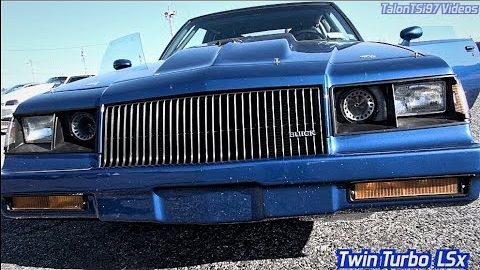 As you get into the automotive modification process, eventually, there’s going to come a point in time where you stop playing around and decide that it’s time to throw a little bit of boost into the equation. Whether it comes from a supercharger or a turbo or maybe even two turbos is up to you, however, when boost is introduced, let’s just say that things tend to get a little bit more interesting and with a video like this, and you can see exactly how that is as this Buick makes its presence felt, absolutely screaming its way down the drag strip.

Now, this video from TalonTSi97 appears to showcase a grudge car, meaning that the driver behind the wheel doesn’t necessarily want to let other people get the inside scoop of knowing exactly how fast it’s running so time passes indicate that they won’t be illuminating the score board, however, just from watching how this thing gets off the line and follows through in the big end, you can really feel the power as it oozes out of every pore of this LSx powered machine, not making any bones about its quickness as those turbos sit in place of the headlights up front, practically glaring at you and daring competitors to take it on.

If you follow along down in the video below, you’ll be taken to the scene of the action at Atco Dragway as this thing absolutely goes out there and slays the quarter-mile with complete and utter ease! There’s just something about watching a twin turbo setup like this go to work that really makes you want to go out there and get to racing. I’m just not so sure that I would want to be found lining up against this car because it might not end well for you.

« Man Fools Cops With Car Made Of Snow, Gets Fake Parking Ticket