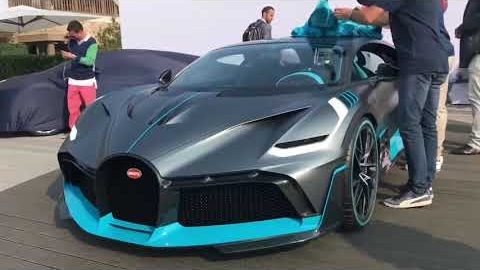 We set the scene in Monterey, California when a new Bugatti would make its way into the world. This is one of those car companies that, when they finally announce they’re coming out the new model, everybody in the automotive community has to drop what they’re doing and pay attention. It’s definitely for good reason, too.

Bugatti has been known to build not only some of the most aggressive performance oriented cars in the world but also vehicles that really show off their curves and angles in such a way that could alert even the least interested party to take a look and see what the cars are all about.

So what was it out in Monterey that was such a big deal this time? Well, not too long ago Bugatti decided that they wanted to release the Divo, a car that retains Bugatti’s trademark 16-cylinder engine boasting its funky W-configuration that cranks out 1500 hp. As the President of Bugatti says, when it comes to the new car, it basically beats the brand’s last model, the Bugatti Chiron, in almost every perfromance aspect. Throw them on a track together and the Pres says that the Divo is almost certainly the winner.

With a new aerodynamic design along with modifications to the chassis and suspension, it’s pretty much an upgraded car in almost every area. The lone area where the Divo can’t compete with its older brother is that the new car has a 236 mph electronically limited speed which makes it slightly slower. I highly doubt that very many folks who own one of these things is going to crack the 200 mph mark anyway but I guess that’s neither here or there.

Now, this toy might seem like one that you’ve just got to get your hands on but not so fast! Even if you’re among the super rich who can afford the $8 million price tag, as you’ve probably learned by now with cars like this, if you’re first hearing about it once it’s already in the news, you probably didn’t make it in time to buy one. As of now, of the 40 that the company is making are already sold out, making it even rarer than the last model, the aforementioned Chiron, which pumped out 500 examples of the car.

If you want to see the latest and greatest Bugatti performance machine that is supposed to be the king of the hill, be sure to follow the video below to see it for yourself.