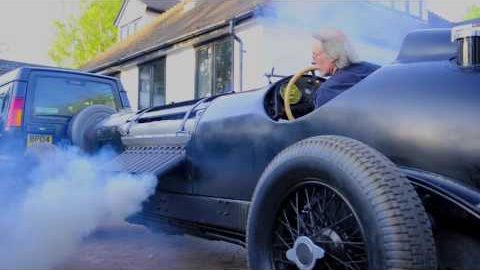 Basically every spec about this car’s massive powerplant is surprising. As the owner walks through what makes up the massive twelve cylinder engine, we found ours jaws dropping, ratcheting lower with each number we were smacked with.

Forty-two liters of displacement. To put that in perspective, that’s roughly the same displacement as seven Chevrolet 350 small blocks!

Fifteen hundred horsepower. That’s more than double the output of a Challenger Hellcat!

Two thousand foot-pounds of torque. That’s rare number for some of the most heavily-modified diesel pickups on the planet.

Of course, this is all packaged in an incredibly heavy chassis, and the engine itself, literally, weighs a ton, so it’s hardly going to scorch the asphalt, but the fact that such a machine even exists, let alone that it runs and drives, is beyond cool. The massive Packard engine is from a bomber – no, there was no 1,500 horsepower option offered by Bentley – yet the car certainly looks passable as a factory creation. Possibly the coolest part of the video is the engine belching out huge fireballs while cranking, which has to look ridiculously cool at night!