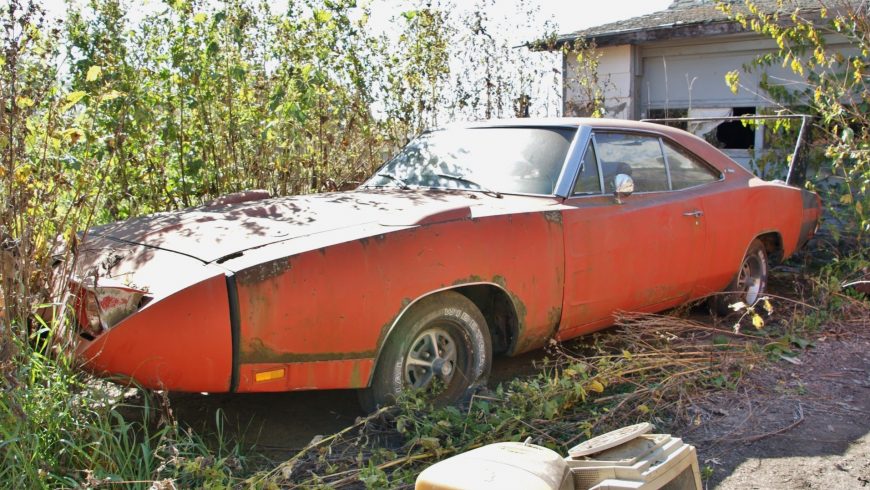 When it comes to barn finds, the 1969 Dodge Charger Daytona is among the rarest of Holy Grail finds. With only 503 built to meet the production minimums for NASCAR competition, the car is exceptionally rare by all accounts. To find one sitting in somebody’s yard being beaten by the rain and sun is an absolute travesty, but there is hope for this car’s future. The owner, who stubbornly refused to have the car restored, or even move it out of the elements, passed away and his family has agreed to consider letting the Auto Archaeologist possibly take steps in preserving the car, at least moving it to a safer location that will keep it from continuing to deteriorate.

The ’69 Charger Daytona was built with the sole purpose of winning at NASCAR’s superspeedway events, where the not-so-subtel aerodynamic additions would help the car reach and maintain top speed down the long stretches and hold higher speeds through the long sweeping high banked curves. While the cars enjoys definite success on the track, they became most notable for being the first car to top 200 MPH, a feat accomplished in March of 1970 at Talladega. Their success was short lived, however, as NASCAR banned the “aero cars” from competition near the end of the 1970 season.

With so few of these cars built, and so many of them already having been snatched up by intrepid buyers who knew what they were and what they would be worth, the car’s value has skyrocketed in recent years. While this car is a 440 Magnum with an automatic that will likely top out in the $300,000 range, the versions featuring the 426″ Hemi and four speed manual, of which only 70 were built, have commanded nearly a million dollars at auction. That’s a huge stack of cash sitting in the yard rotting away, so hopefully the owners family comes to their senses and at least have the car moved to a safer location.

« The History of Chip Foose and Gas Monkey Garage