If you’re a part of the street racing community or follow along with it at all, ...

If you’re a part of the street racing community or follow along with it at all, you know that TX2k17 is the place to catch some of the biggest names as they come out to do battle and high horsepower cars attempt to stake their claim as they completely dominate the city of Houston for just one weekend. Last year, we watched Black Jesus rise to the top of our newsfeeds with an impressive victory over Boosted GT on a Houston street. It was a race that ended with a close finish and this time, Black Jesus is back for more and aiming at another opponent during the biggest street racing weekend of them all!

In this one, we watch from the starting line as the black Ford Mustang Fox Body goes up against the Blueberry, a nitrous powered Comet that looks ready to go to work out there in the streets, no matter what competitor is lining up in the next lane over. In other words, this is going to be a good one!

Check out the video below that brings us the action from the scene as this TX2k17 dig race unfolds and we’re given a front row seat that is probably the next best thing other than being at the spot ourselves. What are you think of this duo of cars throwing down in the streets?

How To Stage Against Birdman - Grudge Racing 101 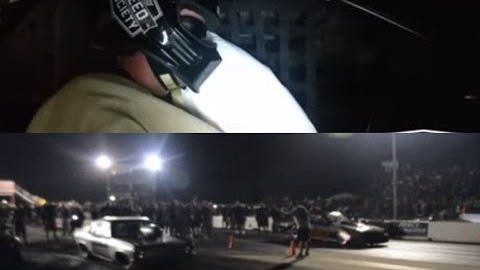