Will NASCAR’s Stance on National Anthem Protestors Hurt or Help Them?

Will NASCAR’s Stance on National Anthem Protestors Hurt or Help Them?

With television ratings on the decline, corporate sponsors dropping off one at a ...

With television ratings on the decline, corporate sponsors dropping off one at a time, attendance falling, and losing their biggest stars like Dale Earnhardt Jr, Jeff Gordon, Tony Stewart, and possibly Danica Patrick, NASCAR is struggling to maintain its position as the number 1 automotive racing name in the United States. With a rapidly aging fan base, and a younger generation virtually ignoring their product, it’s no secret NASCAR needs to do something to recapture the attention of the younger viewers.

With a rapidly aging fan base, and a younger generation virtually ignoring their product, it’s no secret NASCAR needs to do something to re-capture the attention of the younger viewers. With names like Kyle Larson, Austin Dillon, Ryan Blaney and Chase Elliot as their up-and-coming drivers they might just be well on their way.

Multiple team owners have spoke up about the National Anthem stating they would fire any team member who did not stand at attention during the National Anthem. Including NASCAR’s winningest driver, and the “King” Richard Petty, as well as renowned team owner Richard Childress. “Anybody that don’t stand up for that ought to be out of the country. Period!” Petty said, via USA Today. “If they don’t appreciate where they’re at … what got them where they’re at? The United States.”

While NFL players, and teams decide to sit out during the national anthem – the Pittsburgh Steelers went so far as to sit in the locker room while one player, former US Army Ranger Andrew Villanueva stood by himself for the national anthem – NASCAR has taken a bold stance quite opposite to the NFL for a world where acceptance, and tolerance are valued qualities. “Sports are a unifying influence in our society, bringing people of differing backgrounds and beliefs together,” NASCAR said in a statement. “Our respect for the national anthem has always been a hallmark of our pre-race events. Thanks to the sacrifices of many, we live in a country of unparalleled freedoms and countless liberties, including the right to peacefully express one’s opinion.”

Only time will tell whether or not this stance will hurt their bottom line, but it immediately appears to have helped them on social media. Even the President of the United States has taken a positive stance backing their actions. Although their biggest star for the past fifteen years Dale Earnhardt Jr has publicly defended the actions of those protesting the National Anthem. Is NASCAR wrong on their stance? Is it harsh to fire people for protesting the National Anthem? Will this hurt NASCAR’s bottom line? Can it help them? 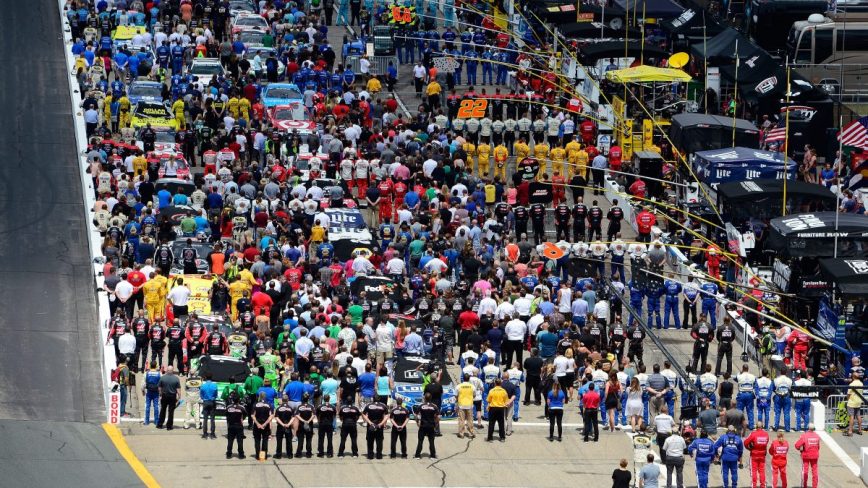