Will Running an Engine on 100% Starting Fluid Cause Damage? Let’s find out!

Will Running an Engine on 100% Starting Fluid Cause Damage? Let’s find out!

I’ve heard all my life that you can start an engine with starter fluid, but you don’t ...

I’ve heard all my life that you can start an engine with starter fluid, but you don’t want to use any more than absolutely necessary because, as I was told “You’ll blow the heads off that sucker!” Well that “conventional wisdom” just may have been wrong all along.

I get it, the stuff is sketchy. It’s highly flammable – after all, it is designed to help kick-start engines that don’t want to start with a little extra fire in the hole – and usually when an engine sprayed with starting fluid kicks over, it sounds a little “turned up” for a second. So the reasoning behind this logic makes sense.

However, it turns out there’s possibly just one big misunderstanding about the stuff. YouTube channel Project Farm has built a huge following by trying all kinds of different things with small engines, with many of the ideas coming from the comments on previous videos. In this video, he’s decided to run an engine on straight starting fluid to see what happens.

After draining the tank, he starts off by spinning the engine over while spraying starting fluid into the carburetor. Much to the surprise of the host and we have to assume most of the 100,000 fans who have watched the video, the engine seems to run just fine. In fact, it runs for around six minutes with zero issues at all. After that, our host decided to spray a whole can of starting fluid into the mower’s gas tank and just let it feed straight into the carburetor. After a rough start up, the engine smooths out and runs great for nearly 20 minutes, with the temperatures remaining normal and no smoke fumes coming from the exhaust. The guy even pulls the head off and inspects the inside of the engine, which looks great, possibly even better than before he started!

Does Seafoam Actually Work in a Car? (with Proof) 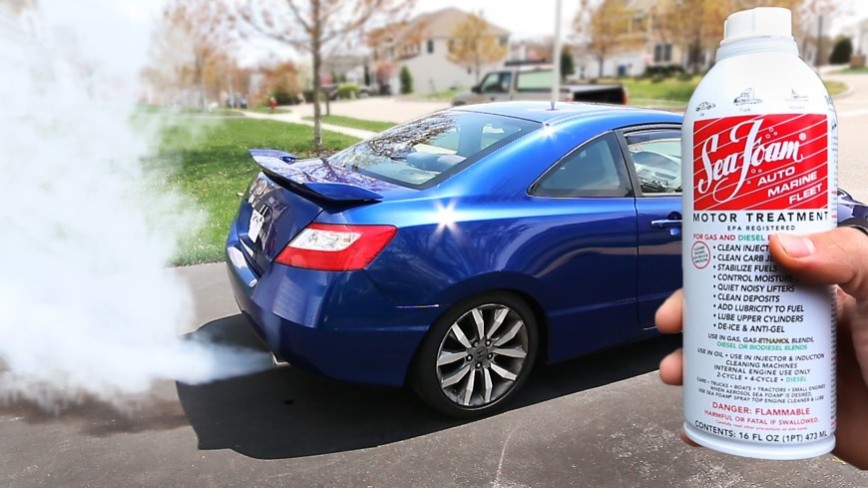