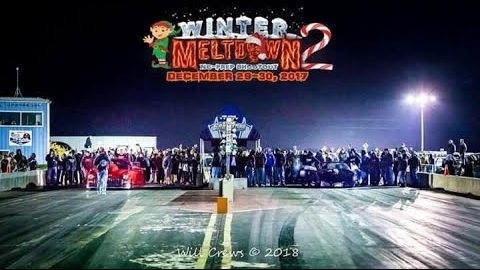 On the last weekend of 2017, Project X Productions threw a race in San Antonio to end the year with a bang! Winter Meltdown 2 was a huge no prep race that drew some of the heaviest hitters in the no prep world to South Texas for a couple of days of awesome racing and good times. Luckily, our buddy Aaron from NXGonzoVideo was there to capture all the action, especially this particular race between two of the biggest names in no prep, Birdman and The 55.

However, this wasn’t just a race between the two heavy hitters. Instead, this race was for all the marbles with the winner taking home the $10,000 winner’s purse. But before they lined up to race, they had to lay down some fresh rubber, and that meant each car’s crew brought their won mixture of traction compound to pour under the tires. The drivers then inch into the puddle with the rear tires and do a long smoky burnout. What they’re doing isn’t a secret, it’s a way for them to add a little extra to the minimal traction available since the event’s promoters scraped off as much of the rubber coating the concrete as possible to even the playing field and make the drivers and tuners work for their round wins.

After the burnout procedures are over and the cars are backed behind the starting line, they bump slowly into the stage beams and wait on the tree to unleash their fury.

Both cars leave hard, but shortly after taking the green light, The 55 in the far lane drives into tireshake and the car’s owner and driver Chuck Parker wisely shuts it down. There’s a real good chance it wouldn’t have mattered though, as Birdman in the near lane had his twin turbocharged Firebird hooked up and laying down one of the best looking no prep passes I’ve ever seen. The car launched hard and drove nearly perfect straight, right down the groove to a take the win and the $10K payday. If The 55 had made an A-to-B pass the outcome should have been much closer, but it would have taken everything Parker had to hang with Birdman on this particular pass for sure.