Chasing the Title of “World’s Fastest Demon” With Leah Pritchett

Chasing the Title of “World’s Fastest Demon” With Leah Pritchett

Straight out of the box, the Dodge Demon is one of the most intense cars to ever be ...

Straight out of the box, the Dodge Demon is one of the most intense cars to ever be produced. There’s absolutely no denying that the drag built street machine is off-the-wall. It is, after all, one of the most powerful production cars in the world and atop the list for mass-produced cars.

However, some folks just can’t leave well enough alone. We just so happen to love those people with a thirst for a little bit more power.

It would just so happen that the Demon is actually pretty welcoming of even more ground-pounding power. In order to make big power in most muscle machines, the bottom end of the engine will need attending to in one way or another. Whether it’s attention to the rotating assembly or even ditching the whole engine and starting with something new, there aren’t a ton of cars that are able to crank out power like this on a stock bottom end.

However, with a pair of turbos, this particular Demon really manages to crank the boost up. It comes to the tune of 1,200 horsepower in an 8-second street car. Speedkore really pushed the Demon to the limit here with plenty of stock components. The end goal was to be able to claim that they had the fastest Demon in the world captured by Larry Chen.

In the video below, we check in with Hoonigan to watch and see just how far the car could be pushed. In order to help get it there, Speedkore recruited one of the best drivers possible in Leah Pritchett. If there’s anyone who would be able to seize the record, she’s your girl!

Exactly how far will Leah be able to take this mean machine? There’s only one way to find out. Be sure to buckle that seatbelt because this one is going to get wild! – Hoonigan AutoFocus.

They Crammed a Hellcat Powerplant in a Miata, Created a Tire Shredding Beast 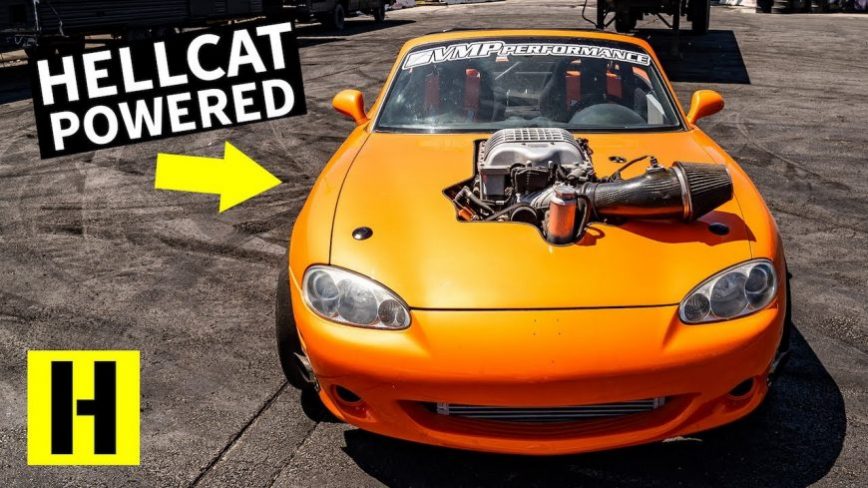