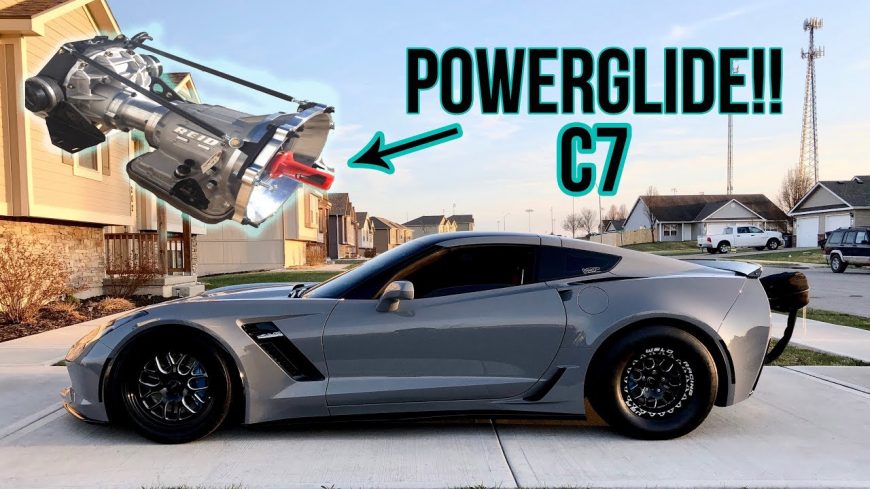 Chevrolet’s C7 Z06 is one of the most technologically advanced cars to ever roll off a domestic assembly line. The most badass Vette ever made – with the exception of the brand new 2019 ZR1 – rolls off the showroom with 650 horsepower and either an 8-speed automatic transmission or a 7-speed manual to send all those ponies rearward.

On the other hand, GM’s powerglide transmission is a dinosaur, comparatively speaking. Making its debut all the way back in 1950, the two-speed slushbox is one of the oldest automatic transmission designs to be widely used in automotive applications. While technology has made the ‘glide a thing of the past as far as factory applications, the gear ratios just happened to perfectly suited for drag racing use and the transmission remains one of the most popular choices for drag racing applications today. As such, it’s often retrofitted into late model cars – you see where this is going now, don’t you? – who are willing to give up the high tech transmission in order to extract the most possible ET from their setup on the drag strip.

Justin Keith, who may be a familiar face to many of you, especially if you follow the popular StreetCar Takeover series of events, is making that compromise and having RPM transmission drop his 7-speed manual and clutch setup in favor of a badass bulletproof powerglide to help him lay down the quickest numbers possible on the track.

While he’s swapping parts, Justin is also swapping a nine inch Ford rear end to increase durability and offer some more options as far as rear gear ratios. These mods should do well to push Justin’s car deep into the 9’s and possibly into the 8-second zone. With almost 1200 horsepower on tap as it sits and a few more pounds of boost and nitrous left in reserve, Justin’s car should be one of the quickest C7’s on the planet and ranked near the top of the quickest street-driven Corvettes in the world as well.

« Subwoofer Has So Much Bass It Freaks The Camera Out… Looks WIld!