World’s Most Insane SRT-8 Jeep Gets Sideways in Burnout, Takes Out Tree

World’s Most Insane SRT-8 Jeep Gets Sideways in Burnout, Takes Out Tree

From the most experienced racer to ever set tire on a drag strip all the way to ...

From the most experienced racer to ever set tire on a drag strip all the way to novices entering a race for the first time, things happen sometimes. It could be for a variety of different reasons and you never really know when it’s going to strike. However, every once in a while, there’s a situation that pops up that seems to be some sort of freak accident.

For those who haven’t met the Jeep Grand Cherokee SRT-8 by the name of “Suspect 2.0,”  and the guys from Demon Performance, they definitely reside on the more experienced side of the spectrum. Also, if the Jeep with the parachute hanging off the back looks a little bit intimidating that’s because it is. In fact, this particular monster was the first jeep to ever reach 200 mph in a half mile and also manages to chug its way down to quarter mile in just 8-seconds. How’s that for a truck that’s shaped a little something like a brick?

On this particular outing at Street Car Takeover Bradenton, though, it looks like things got a little bit too sketchy right off the bat. For anybody who has ever stood next to an all wheel drive vehicle doing a burnout, they know that things can get a little bit haywire sometimes. As the tires spin and snap into traction, the vehicle can go in just about any direction imaginable. It’s usually the driver making a quick adjustment to pull it back onto the racing surface that prevents it from hitting anything.

This time, though, it looks like the burnout managed to get away from our driver as the Jeep veers sideways and into the starting tree. Luckily, it doesn’t look like too much damage was done and Suspect 2.0 would live to race another mind melting 8-second pass down the quarter mile.

Truck Does 360° Spin, Still Wins In One Of The Craziest Race of Year! 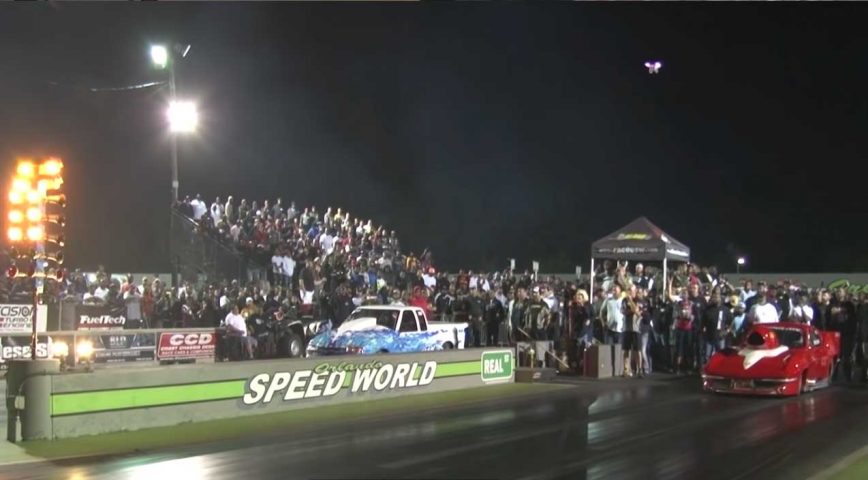