Yes, This Badass Motorized LEGO Chainsaw is a Real Thing! 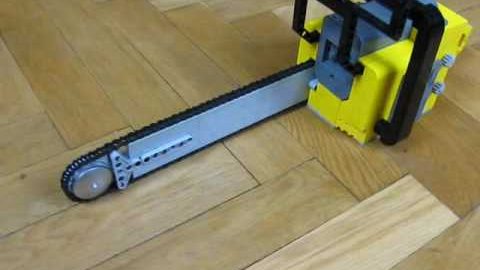 We’ve seen people build all kinda of things out of LEGO blocks but this is definitely the first LEGO chainsaw that we’ve seen. And this isn’t just a kit that this guy picked up off the shelf, it’s fully custom build with working gears and a real chain. Of course it’s not metal and it’s not going to fell any trees or dismember any nosy teenagers, but it certainly looks the part and works good enough for us.

We don’t have any info on what kind of power this thing has or how the design came to be, but we do know it has a motor built in and some pretty crazy controls to be made completely of LEGO bits. It has an on/off trigger that send the signal to the motor, and a built-in speed control that dials up the speed of the chain. It also has an ergonomic – or as ergonomic as LEGO bricks can be – handle on the back as well as a top handle and chain brake. The guy demoing the build holds it by the brake instead of the handle, but he added a caption to the video that he realized he was holding it wrong.

While it may not be fully functioning as far as actually cutting timber, there’s no denying this unit looks very much like the real thing and with the working electric motor and spinning chain, it plays the part well. We would like to get our hands on this thing and tear it apart to see just what makes it work and how this guy managed to make it look so realistic.

If any of you guys out there have built some awesome LEGO projects that deserve to be seen by the world, send us a link on our Facebook wall and we just might throw it on the site. Make sure you include some info though, so we can let everybody know what’s going on in there.