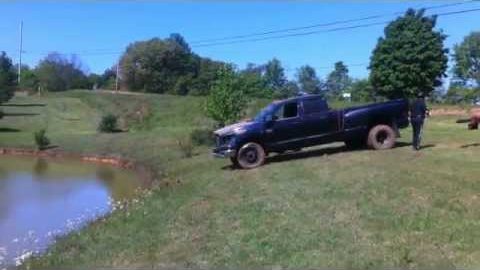 I guarantee you that when you’re having a bad day, there’s probably somebody out there who is having a worse day. It is by this logic that you can always make yourself feel a little bit better even when things look like they have a giant gray cloud hovering over them. Even for the owner of this truck, there’s probably somebody who has it worse off than him but, for one, I most certainly would not want to find myself in this guy’s shoes. We would assume this one was probably a pretty normal day, that was, until he managed to sink his entire dually into the water!

At that point, it was time to get somebody to come out and pull this Dodge Ram out of the drink so they rang up the tow company and got down to it. It was at this point that the situation would become even worse when the guy trying to pull it out failed miserably, losing the truck from the grips of the towing machine that was supposed to be pulling it out of the water and sinking it back into the water once again. It probably couldn’t do any more damage than it had already done but, something like this really just adds insult to injury. I would assume that the person in this situation wanted nothing more than to go home and this little blunder was definitely going to delay that by at least another couple of hours.

The video below shows off this one giant facepalm moment that had this guy regretting every second of whatever it was that led up to the moment. With something like this, the only thing you can really do is shake it off and keep on moving forward, hoping that tomorrow will be a better day. For now, it really looks like this day is a complete wash!