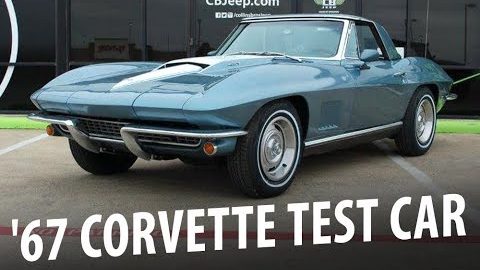 When it comes to some of the coolest cars that we know, sometimes, the design of the car isn’t where the “wow factor” stops. Sure, the car that has nice body lines and a grumbling power plant under the hood can really get all of our senses tingling. However, when a car brings it all home with an awesome story, it’s something that we can really immerse ourselves in. Knowing exactly what a machine has been through and how it might even contribute to history can make an awesome car so much cooler.

If there’s one guy who really knows the ins and outs of plenty of cars and what could make them cool, it’s Dennis Collins. You might recognize him from a plethora of automotive shows including Fast N Loud. He also has quite the collection of automobiles himself. This time, we’re going to take a moment to dig into one recent addition to the collection that is surely a head-turner, especially we learn about the history behind the car.

On the surface, it looks like a traditional 1967 Chevrolet Corvette. However, we dig into it, we find that it is a Chevrolet Engineering Center test car. That means that it is one of the original building blocks to what Corvettes would eventually become. With the car, they tested all sorts of different components including a variety of engines.

There are believed to be two examples of this car. One is a coupe and the other is the roadster that we see here. The crazy part is that these sorts of cars normally get crushed when they’re done with. Most of the time, it would be almost impossible to get them safe to be driven on the road. The companies that produce them don’t want to have the liability if something happens. Therefore, it just makes more sense to get rid of them entirely.

However, in this case, after this test mule was used, one of the engineers won the right to buy the car. After being hounded on and tested for a grueling 45,000 miles, the car was driven sparingly once the engineer took it into his possession.

By following along below, we get to hear the full story of the car and how Collins ended up with it.