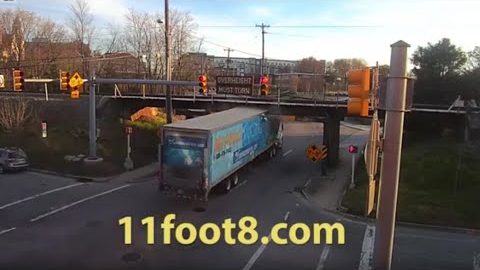 Standing at 11’8″ in height, the bridge appropriately touted “11foot8” might just be the most destructive inanimate structure in the world. For pretty much anybody who has seen a video of a truck getting its roof peeled back on a bridge, this was more likely than not the culprit. In fact, there is an entire YouTube channel dedicated completely to showing off all of the victims of the bridge. No matter how clearly it’s marked, for one reason or another, it seems like overheight vehicles continue to plow into the structure. Sorry for a little bit of a spoiler alert here but things don’t always end up going so well.

This time, we catch up with a semi-truck driver who didn’t really end up being quite lucky enough to spot the sign and slow down. In fact, we aren’t making any accusations here, but it looks like he might have even been speeding up a little bit to make it through that red light. The driver might have anticipated getting a red light ticket in the mail but just seconds later, if he was thinking that, it was now the least of his worries. Instead, the entire roof of the trailer on the truck in question was sliced off almost like sending a hot knife through butter.

By following along below, we get to witness the exact moment that everything went wrong. As painful as this one might be to watch, it’s one of those videos that it’s hard to take our eyes off of. It seems like no matter how popular this bridge gets in online videos, there’s always somebody that provides their vehicle as another victim to the 11foot8 monster! Take heed if you’re ever in Durham, NC and overheight. This bridge might just be coming for you!

« Do Shady Mechanics Try To Rip Off Women More? Undercover Reporter Finds Out