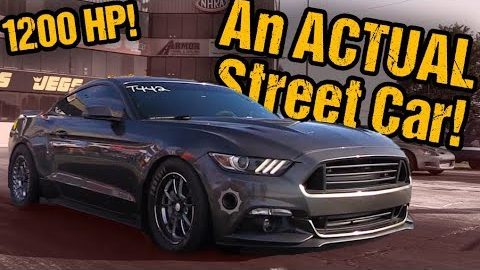 One of the terms that is thrown around far too much in the racing community is the term “street car.”

It seems like people somehow think that calling their vehicle a street car when in reality it’s more like a ProMod, they gain some cool points or something. Somewhere in between where those cars sit and bone stock showroom vehicles, we have actual street cars. These machines not only rip out on the drag strip. They also offer up some creature comforts and are able to drive over long distances comfortably.

This time, we head down to Street Car Takeover in Columbus, Ohio. On tap is none other than a Ford Mustang. This thing is really dialed in and absolutely shocks everybody. We know that there are a lot of people who would argue that a Mustang could never be a sleeper. However, we would retort that if a Mustang could be a sleeper, this would probably be the car.

If someone were to take a spin around this machine, there isn’t much that they would see. Outside of the drag racing wheel and tire setup, not much about this car says it’s that quick. In fact, with a 17-inch wheel out back, most people would probably pass it by, not considering that it could be one of the faster cars on the property in Columbus. When the machine finally hit the track, though, it would actually provide quite a surprise for plenty of spectators.

By following along with the video below, we check in with the car that definitely has seen its fair share of street driving. When it’s time to go to work though, the machine throws a powerful punch. Not only does this car have plenty of creature comforts and drivability but it’s also able to deliver a high eight-second pass, seemingly with ease.

« Dodge Demon Burns Down as Lazy Track Crew Does Their Best to Avoid Putting it Out.