Close your eyes after reading this first paragraph and imagine something with us. ...

Close your eyes after reading this first paragraph and imagine something with us. You’re cruising down the highway in a build capable of some serious horsepower. Say you’re in something like a Chevrolet Camaro or Ford Mustang. The machine weighs in at about 3,800 pounds and is cranking out some major power. With the likes of 1300 hp through a turbocharger, the build is sure to absolutely fly. Feel the g-forces hit you in the face as that turbo spools up and brings the car to life.

Now, when recalling that same feeling imagine that all of the weight is pretty much gone.

That’s exactly what we’re looking at in this particular feature from the guys over at That Racing Channel. Instead of a heavy streetcar, the machine making the madness happen is none other than a jet ski this time. However, the machine does share a couple of similarities with a well-built street machine. One of the first things that we find in common is the likes of a 76mm turbo. When combined with the engine that appears to be a 4-Cylinder Mitsubishi, the turbo is able to crank about 60 psi of boost through the combination. Right now, though, it’s on a bit more modest 40 psi to get things smoothed out. When all is said and done, we can expect that 1300 hp or so, wide-open, would absolutely send this thing on a tear.

For those looking for a little bit of last-minute summer fun, this is one way to go about doing that, for sure. This machine is sure to light up just about any summer situation that can be thrown in its direction. When it really comes down to it, most would probably have the time of their lives on board, if they’d be willing to ride, that is. 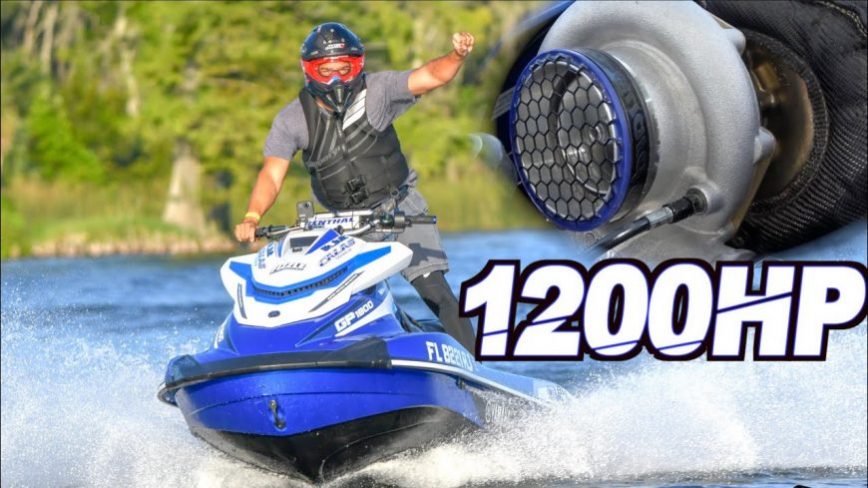