1969 Dick Harrell Camaro Barn Find Goes Back To The Track 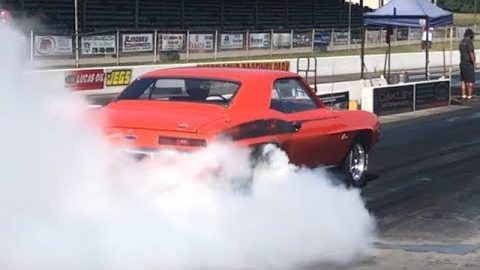 If you were anywhere near the drag racing scene in the 60s and 70s, there’s a good chance that you know about Dick Harrell. As he rose to be one of the most popular names in drag racing, many would attribute him to being the face of Chevrolet in the battle of the big three that was evolving during those years, at least when it comes to competition on the drag strip. Before long, Harrell would become so ingrained with the brand that he will eventually even be able to spin off his own dealer package as it was believed that he was the first to install a 427 into a Camaro for a dealer, as a package to be sold to the public in a brand new car, something that was revolutionary at the time.

These cars were quite limited run and because they were among the first of their kind, they have since been vehicles that would end up bringing good amounts of money on the auction block. Just recently, a car similar to this one has sold for a quarter of a million at Barrett Jackson. Therefore, you can imagine the excitement when such a machine was discovered, just sitting in a barn away from sunlight, all of these years with original numbers matching and seemingly with most of the original parts is still intact, bringing to the table a lot of special elements to take a look over.

Many would claim that this is one of the great Camaro barn finds of all time, a true once in a million opportunity to get your hands on what is believed to be one of five or six vehicles like it to ever exist. This time, we get to see something special that you’re not going to find with too many other barn finds as the car is actually put on the drag strip for the first time after being dug up and it actually manages to almost break into the 11-second range, spinning the tires and going 12-seconds flat.