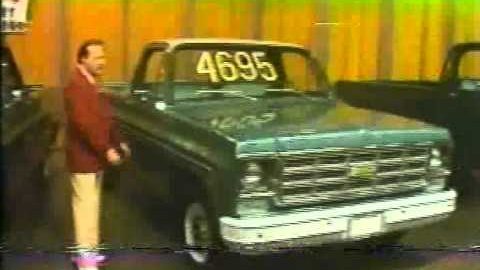 These days, we ask a lot of modern trucks. Not only do we expect a complete workhorse of a machine. We also want lots of creature comforts. Trucks have definitely evolved a long way over the timeline. Back in, say, the late 70s, they were nothing more than machines designed to get the job completed.

Because of that, pickup trucks were a little bit cheaper. Even when we account for inflation, they seem like a pretty good deal by today’s standards. In the current market, trucks are not only more complex but also tend to be a more popular segment as well.

This time, we check out a commercial from the “Friendly Chevrolet” dealership. With the ad, we see how advertising has evolved over the years as well. This commercial is almost unlike anything that we would see as far as attempts to sell vehicles go. The vintage commercial has nostalgia flowing out of every pore for those who were around in those days. For those who weren’t, they might notice a couple of key details that really stick out as strange by today’s standards.

For starters, the first pickup truck available in the advertisement comes with an asking price of less than $4,000. Even in today’s money, that’s right in the ballpark of $16,500. These days, a base model Chevy full-size truck will set you back at least $28,500 for a bare-bones basic model.

Needless to say, things are definitely in an entirely different world than they were back then. By following along with the video below, we get to take a look into the past. Things were, far and wide, much simpler back in those days. Whether that is for better or worse is up for interpretation. There’s no denying that the world has gone through some crazy changes since then.