$20 Supra Rides are Back

$20 Supra Rides are Back

As someone who is fully immersed in the car community, you probably know the feeling ...

As someone who is fully immersed in the car community, you probably know the feeling of wanting to share that community with other people, but running into those who aren’t exactly involved with the world of automobiles or just don’t understand it can be a little bit difficult to wrap your head around and bridge the gap. You have to remember that, while it might seem like all of your friends are very entertained by lots of horsepower, there’s a very large group of people out there, probably a bigger group of people than not, who just don’t get the need to spend countless dollars on making your car go faster but this Toyota Supra is making them understand.

In this video, we check out both of those groups of people in those who don’t understand the car culture so much and people who are really into it, both of which are sharing in the passion for horsepower. All of this is facilitated by a Toyota Supra that has a fair amount of both bark and bite. For just the small sum of $20, anybody who just so happens be riding by can get their chance to take a stab at a ride in this car, feeling all of that power making its way to the ground as the turbo chirps away and lets anyone with a set of ears know what’s coming.

If you follow along down in the video below, you’ll be able to join in on the fun for yourself, watching all of the variety of people who wanted to go for a ride in this insane Japanese import that’s really has a lot to offer. Thanks to the video posted by the owner, Sik2jz on YouTube, you’ll be able to ride along with the car for yourself, getting a little bit of a taste of what this turbocharged beast has to offer and seeing the reaction of people who are absolutely loving every last-second of it. 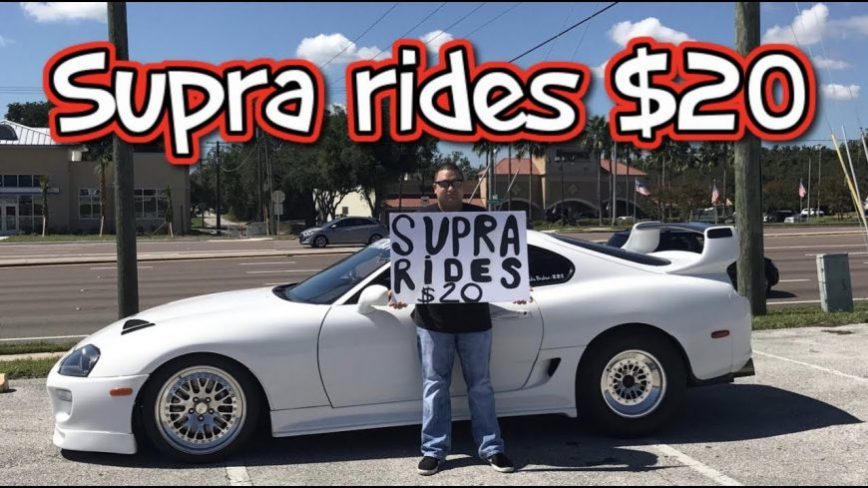