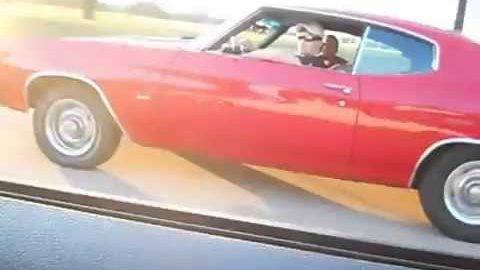 When it comes to classic American muscle whats under the hood is always a mystery, the car could be totally stock or could have a whole lot of cash under the hood and can easily smoke you especially if you are in a newer Mustang. The car in this video is packing a 383 so we know the Ford doesn’t stand a chance.

The Chevrolet 383 Stroker is a hot rod engine never truly created in normal production for use in a specific car. The engine is a General Motors Chevrolet engine that is made for hot rod enthusiasts who love to modify their cars, trucks and add some extra power.

Although this engine was never offered in normal production in any cars, there are many vehicles where you may find this engine installed, particularly at a hot rod car show. Some common applications for this engine are the classic Chevy Nova, Chevy Camaro, and almost any other classic Chevy body.

The creation of the Chevrolet 383 Stroker was born out of creativity. The engine is essentially a Chevy 350 block, but uses a modified crankshaft from the Chevy 400 for increased stroke and as a result increased displacement.

The Chevy 350 block was first made in 1967 and at some point not too much later the engine started being modified into the 383 stroker. It is not clear exactly when this first modification occurred, but it was some time in the 1970s.

This was a pretty basic race, both cars take off around the same time and the Chevrolet Chevelle pulls on the Mustang GT with ease. This Chevelle looks stock, with rally wheels, stock ride height, and a beautiful paint job. It looks like it just came off the showroom floor.

Scope the video below and listen to the engine roar as he pulls on the Mustang.