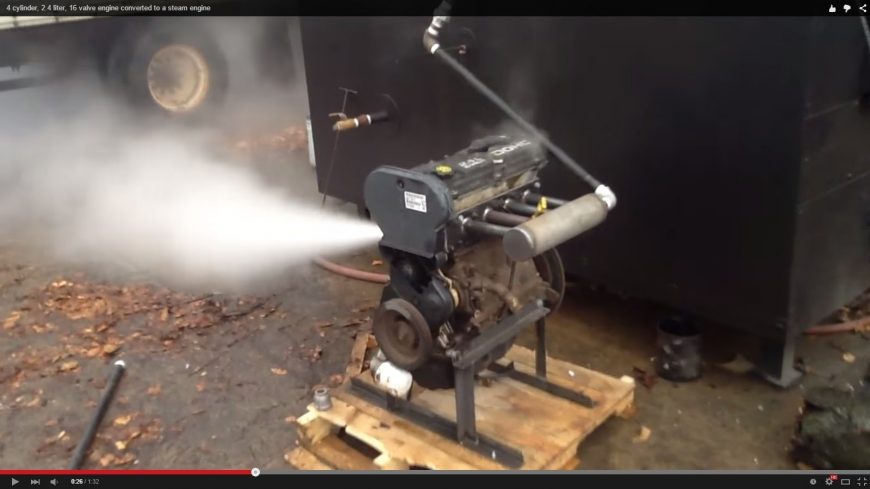 These days, it seems like power under the hood ends up coming from all sorts of different places. Electric really seems to be the cutting edge of technology these days but, that isn’t the only way to get around. Of course, you can go with traditional combustion or even a hybrid of both. This time, however, we check out something completely different from what we’re used to these days. In fact, it takes a kind of sizable step back but that isn’t to say that it’s void of being cool to look at. We would actually say that it’s pretty mind-bending to see exactly how someone made this come to life.

Instead of trying to make some sort of super efficient powerhouse that sips on fuel and cranks south an insane amount of horsepower on the other end, this time, we check out something that is powered by steam. This power plant that used to be a four-cylinder, 2.4 L, 16 valve combustion engine has since been converted from a gasoline-powered mechanism to a steam-powered mechanism. Giving us a blast from the past, this combination really calls for something to plop under your hood, roll up the car show with, and really have people scratching their heads trying figure out exactly what’s going on.

Follow along in the video below the shows off this engine that has become something completely new but still offers up an old and familiar face. We’re not really sure what the motive behind this one is, whether it’s just for show or has some sort of more complicated purpose, but one thing for sure is that it’s definitely a lot of fun to take a look at. After checking this one out yourself, be sure to tell us what you think of the use of steam to make this engine tick.

« Irritated Driver Gets Blocked in, Finds Owner and Confronts Them