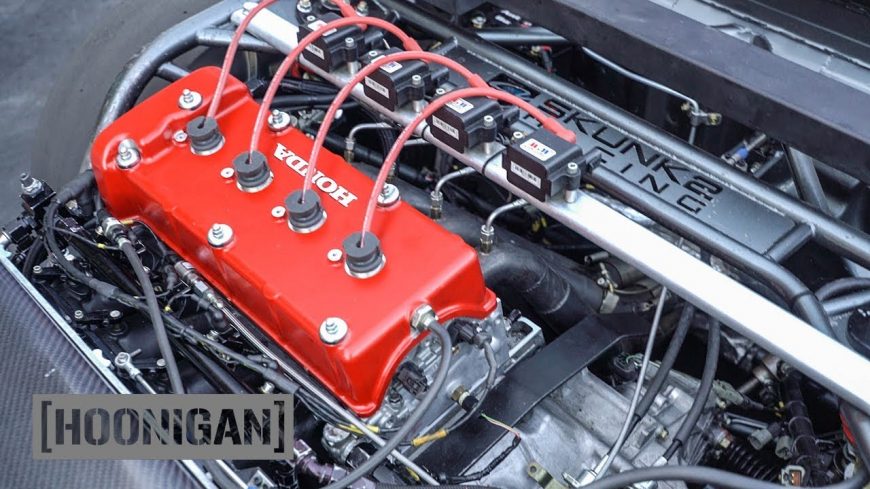 This thing is badass, and thanks to the guys over at Hoonigan, we get to share this awesome in-depth look at Doctor Charles Madrid’s absolutely wicked drag car, the Skunk2 Acura Integra. The car has been a best of 9.0 in the quarter mile, but when Charles and crew are able to put all the power down earlier in the run, it should dip deep into the 8’s.

Those numbers would be impressive for pretty much any car, but to run that quick through the quarter in a car powered by a four-banger is ridiculously impressive, never mind the fact the engine is naturally aspirated. The 2.7 liter power plant is based on Honda’s K20 engine and, at least according to Madrid, is relatively tame, at least in the bottom end. Whether or not you buy that is up to you, but something tells us there’s some pretty advanced stuff going on inside that block. Charles insists, though, that the magic all comes from the head work and cam profiles, which is certainly the area where the difference in big power and huge power can be made.

From a pure aesthetic standpoint, the car actually looks amazing too. The body is clean without too much in the way of gaudy paint or obnoxious decals. Everything follows the white, black and grey color scheme, from the color coordinated sponsor decals to the wheels. The nose is a modified carbon fiber Pro Stock piece that’s been modified to look like an Integra nose, and the car has lightweight carbon doors, but the rest of the body is factory sheetmetal. Couple the carbon parts with a gutted interior and the car sill only weighs 1,730 pounds, and is even carrying couple hundred pounds of ballast to help with the balance.

Not only is this one of the quickest cars to ever grace the Hoonigan HQ, it’s also the loudest, which the guys are quick to point out. Thanks as always for checking in, we’ll have more from the Hoons soon!