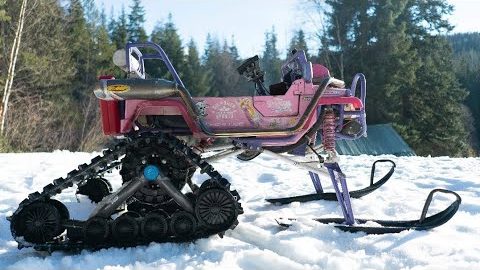 The next time that somebody tells you that you can’t do something fun and make money at it, direct them to the Grind Hard Plumbing Co YouTube channel. These guys are living, breathing proof that just about anything can be turned into a line of work. All it takes is a little bit of insight and a lot of dedication.

For those unfamiliar with the channel, it seems like their basic goal in life is to take Power Wheels toys and make them all-powerful. They have several different creations for different purposes. The one that we’re focused on now, though, takes us off of the beaten path just a little bit.

The phenomenon of making Power Wheels more potent isn’t necessarily new. We’ve seen all sorts of gear upgrades and battery upgrades floating around the internet. These modifications might be good for when little Johnnie grows up a touch. However, these guys really take it to the next level. Instead of basic upgrades, they build completely custom components to take these children’s playthings and turn them into something extreme.

This time, we take a look at one of their Jeeps that really goes overkill on the custom work. In fact, this one might not have very many components left from the original machine. Combined with a 50 hp gasoline engine, the Jeep is simply something to write home about.

In this episode, we watch as the guys throw a whole gamut of better parts at it. Apparently, the Jeep was together but not necessarily where they wanted it. However, with better tracks, better exhaust, a new fuel pump, and Rotopax, we would think that it’s getting to a happy place.

By following along with the video below, we get to spectate what might be the most creative fun that anyone has ever had with a Power Wheels. It turns out that bringing together combinations like this is a lot more difficult than one might imagine.

« Restoring a Bent and Rusty Nail to Perfect Original Form