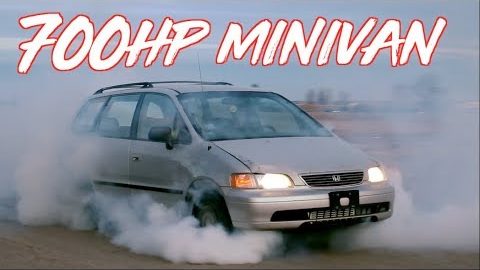 Sleepers come in all shapes and sizes, and the term is often relative and depends on the context. However, minivans are almost always overlooked and if one happens to be fast, 100% of the time it’s unexpected. So to run across a Honda Odyssey that cranks out over 700 ponies to the front wheels is quite a treat.

This one does just that, and until you hear it running there are no external clues that it’s anything other than your run-of-the-mill mom mobile, used for hauling kids and groceries around town and the occasional girls night out. Hit the ignition though, and a trained ear will know immediately that something more lurks under the tiny little minivan hood. To the general public, it probably sounds like the poor engine is on its last leg and has a terrible exhaust leak, but those in the know can tell that’s actually the sound of lurking fury waiting to be unleashed on an unsuspecting sports cars that may be so unlucky as to wind up in the next lane at a redlight.

With an H22 wedged into the engine bay and an eBay turbo force-feeding the four banger 22 PSI of boost, pushing the dyno to an impressive 727 wheel horsepower. Those ponies send the Odyssey through the half mile at a butt-puckering 153 MPH through the half mile, speeds that many sports cars can’t reach in the standing mile. You can see in the video from inside and outside the van, it’s a little sketchy at speed, but when you’re trying to push a potato to speeds typically only seen by swoopy coupes, that’s bound to happen.

We have to give this guy credit for building such a cool ride on a relatively small budget and taking it all the way to Florida from Colorado to compete in the WannaGoFast Half Mile. He lines up with a familiar-looking Corvette skeleton that’s known for laying down some crazy numbers too, and gives him one heck of a race through the half mile!