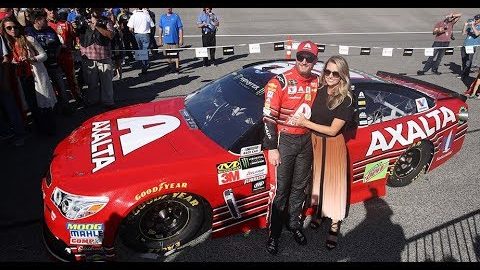 Dale Earnhardt Jr skyrocketed to instant fame quite literally the second he joined his late father in the NASCAR ranks, becoming the sports biggest draw and America’s high-speed heartthrob all at the same time. Junior had the rare ability to be a favorite of both men and women, drawing a massive influx of female fans to the sport while the longtime male fans rallied to his camp, especially after the devastating death of Dale Sr.

Junior recently married longtime girlfriend Amy Reimann and it was announced shortly after that the couple is expecting their first child. While attending the Super Bowl, Dale and Amy crossed paths with Fallon, and Dale took the opportunity to request Fallon’s blessing on his unborn baby. In true comic fashion, Jimmy delivered the least-blessy blessing ever, opting instead to yell an impromptu greeting into Amy’s baby bump. “HEYYYY! YOU ARE AT THE SUPER BOWL! I CAN’T WAIT TO MEET YOU!”

Obviously Fallon is no man of the cloth, so I can’t imagine how random it must have seemed to have the perpetual crown prince of NASCAR asking to bless his baby, but Fallon handled it like a champ.

Dale goes on to discuss his reasoning behind the seemingly random request, and how he and Reimann often discuss the cool events their baby gets to attend before she’s even made her way into the world yet. Hit that play button below to hear the story in Dale’s own words, I promise it makes a lot more sense to hear him telling the tale.