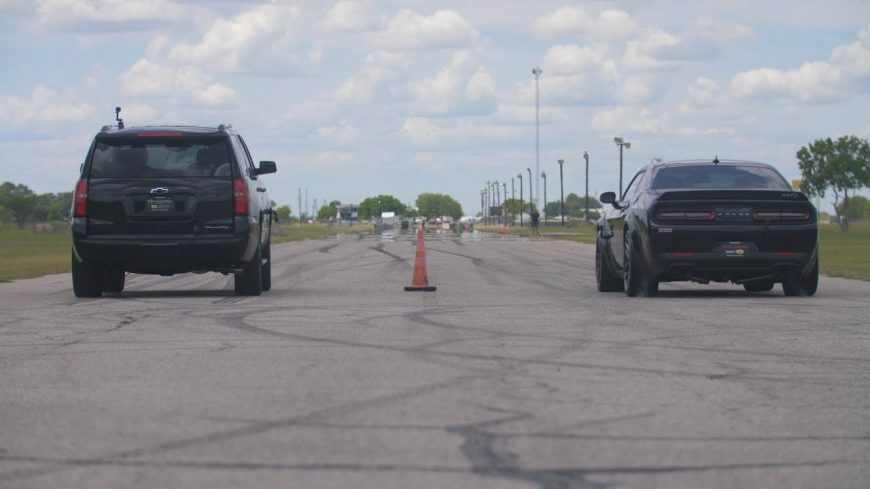 In this day and age, you really hear the term “sleeper” thrown around quite a bit. Sometimes, it might be applied to rides that don’t necessarily fit the bill as much as they probably should. However, it’s really hard to argue with the fact that this Chevrolet Tahoe is anything but a sleeper. As a bone stock appearing SUV that weighs probably twice what that of the competition does in most scenarios. There is absolutely no way that you’d expect something like this to be taken seriously but that’s where this beast of an SUV really shines.

In this one, we get to see just how far the legs of the truck can possibly be stretched when someone who wants to go fast and show what it can do takes the opportunity and seizes the moment as a Hellcat Challenger rolls up to the line for a little bit of a friendly challenge. Even when a Hellcat remains stock, it’s still one of the most powerful cars that you’re going to come across on the street so you’d better be coming with your A-game if you want to try and take your chances with one.

Follow along with the big, bad SUV below as it takes its chances when going head to head with one of the most dominant cars that Dodge has to offer. If there’s one thing that we really love about this SUV, it’s that it doesn’t break character as the stock appearance is guaranteed to make jaws drop as the opposition sees how not stock this thing is under the hood. I think you can already see how this one is shaping up! It’s oddly satisfying to watch as the heavy GM product as it’s able to float like a butterfly and sting like a bee so be sure to tell us what you think of how this heavyweight really packs a punch.