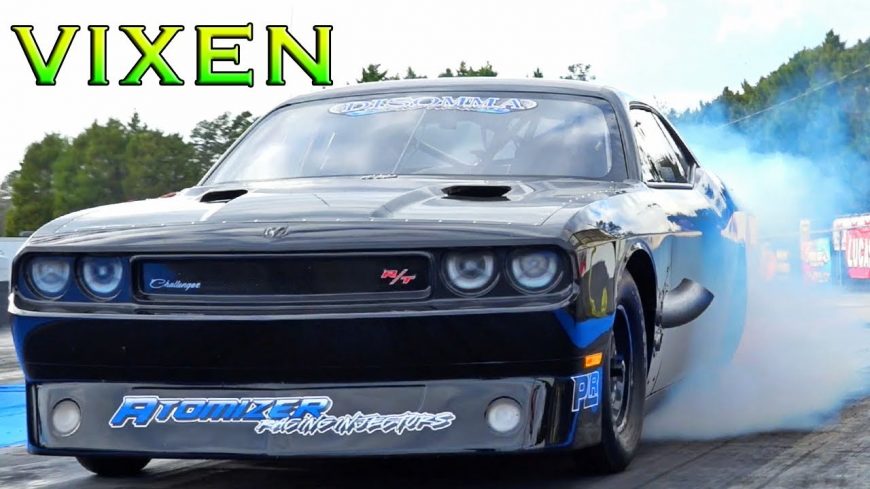 This insane twin turbo Challenger, nicknamed Vixen, is destined for the no prep scene, and if these test hits are any indicator of what the rest of the field should expect, they might want to consider just staying home. Using a little scientific process and making an educated guess, based on the decals on the car and what they likely represent, the car is powered by a twin turbo HEMI built by Disomma Racing Engines, one of the most successful operations in all of drag racing. There’s a ProLine Racing decal on the nose of the car, which I assume means the forced induction setup came from them, although the engine parts themselves could be PLR components that were machined and assembled by Disomma. Hopefully we can find out some more information about the build soon.

On the nose of the car, there’s an Atomizer Injectors decal, and on the rear wing, a FuelTech sticker. If you know anything about fuel management, you know FuelTech has quickly become the go-to in that arena, and using it to activate the massive Atomizer Injectors is a sure-fire way to make sure your ride has plenty of fuel and is utilizing it properly. Finally, one of the most telling stickers on the car, the Tuned by Bruder Bros. decal on the rear fender under the Vixen decals. If you know the name, then you know why this is a big deal. Nick and Rich Bruder are one of the most dominant forces in the world of X275, having built cars on multiple occasions that resulted in rules changes based on nothing more than their ability to extract every last bit of power and performance from their combinations. Having the Brothers Bruder doing the tuning means this car will be our for blood as soon as it rolls into its first no prep race. If you don’t believe me, just watch the video below.