For those who have been watching the trajectory of Aghakhani’s career, ...

For those who have been watching the trajectory of Aghakhani’s career, it’s hard to not be impressed. In fact, it’s looking more and more like Aghakhani is becoming the main event before he’s even legally an adult. Back in March, we reported on the fact that he was in the process of becoming the youngest professional driver in the world at age 16. This came after prompting the governing body to reconsider their rules for younger drivers the year prior.

Fast forward a couple of months and young Steven is adding a little bit more gold to the trophy case with his co-driver Jacob Eidson.

AutoMobilSport.com reports “Steven Aghakhani came home a winner in his debut weekend of North American professional racing competition Saturday at Road America where he and co-driver Jacob Eidson persevered to a breakout overall and Pro class victory in the No. 6 SADA Systems US RaceTronics Lamborghini Huracán Super Trofeo Evo.”

With this, he’s the youngest double-duty driver in the world to compete in both the Italian GT Championship, representing Lamborghini as their brand ambassador, and in the North American Super Trofeo Series.

Now 17, Aghakhani and Eidson, 25, were the first to the checkered flag on Saturday at Road America after reeling in a second-place finish in the first race of the doubleheader.

The crew had been taking the timeout provided by COVID-19 to prepare as much as they could, a strategy that surely paid off. However, there was a bit of adversity thrown their way before the qualifying session that took place on Friday. Expecting to come into the weekend racing the Pro-Am class, the duo would be bumped up to the All-Pro division. This last-second change would truly put their preparation to the test. Clearly, though, the unexpected adversity didn’t phase the team as they took it in stride on their way to a P2 overall for the weekend.

Saturday’s race would start with a bang as Eidson absolutely dominated. However, a safety belt and harness issue in the pits would turn a 3-second lead into an 8.98-second deficit. Try as he might, the margin would simply be too large for Aghakhani to overcome on the track. However, as the team did their math, they knew that they would still stand at an advantage.

While they did run into an issue in the pits, it would be somewhat offset by the leader’s 5-second penalty for not maintaining proper position in the starting grid. As both of the teams would show, sometimes, races are won in the seemingly smaller details.

Aghakhani did report that “Safety has to be the priority in these situations, so I just returned to the race, kind of closed my eyes and started ripping off lap after lap, slowly bringing down that gap.”

With about 20 minutes left in the race, the 8.98-second gap would be cut to about 3-seconds. While finishing second on the track, Aghakhani was propelled into the lead on the scoreboard with the aid of the 5-second penalty assessment.

As far as Friday’s race, there wasn’t quite as much drama involved throughout. It wasn’t until the final laps that things really got cooking as Eidson crossed the finish line just 0.678 seconds behind the leader.

If you want to see the next outing for the dominant duo, the IMSA Lamborghini Super Trofeo North America heads to another doubleheader at Virginia International Raceway with a pair of 50-minute races. They will stream live to IMSA.tv at 11:45 AM eastern on August 22 and 12:50 PM eastern on August 23. 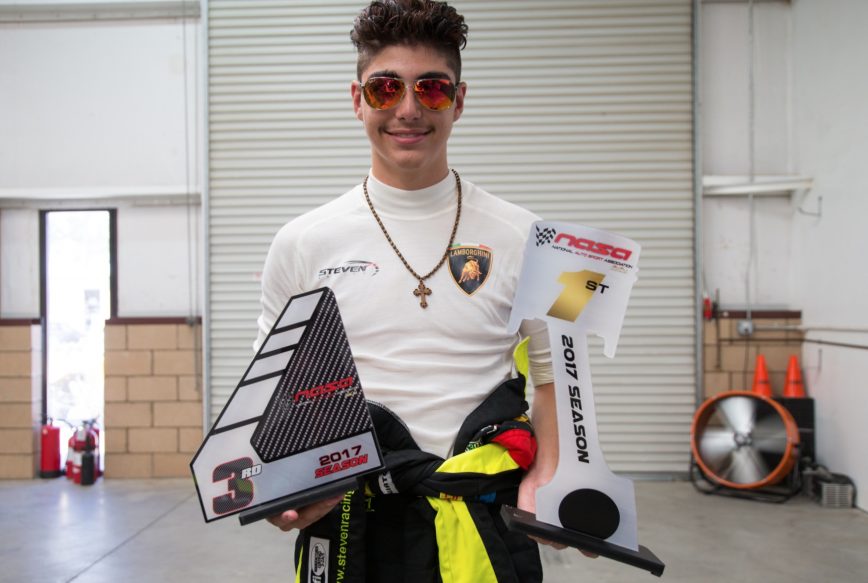