We don’t really have much as far as context, but this video is pretty self ...

We don’t really have much as far as context, but this video is pretty self explanatory: something’s gone terribly wrong with this boat, and despite their best efforts, the guys on board can do nothing to save it from the depths. It looks like the man on the wheel has the right idea, as he tries to keep the boat moving to prevent it from filling with water, but just a few moments into the clip, it becomes painfully obvious this boat is going down, and it’s taking those on board with it if they don’t come up with a plan quickly.

Pay special attention to the guy up front on the bow as the boat begins to list and eventually roll over onto its side. He deftly scampers to stay on top of the vessel, moving with the skill of an experienced performer as he manages to keep the boat beneath his feet as it rolls and sway’s beneath him. Eventually, he ends up walking down the side of the hull and leaping toward open water, hopefully avoiding any turbulence caused by the sinking boat that might pull him under.

There are several people in the water swimming toward the boat before it goes under, but it seems the running engines and churning propellers are keeping them from climbing aboard to help, leaving them helpless to do anything but watch as those on board struggle to keep the boat afloat.

While it seems likely that alcohol was involved in this incident, we don’t really know exactly what happened to cause the boat to begin taking on water. However, based on the fact that there are several other boats, music blaring, and what seems to be a party going on, it isn’t a stretch to assume there was a little beer and liquor involved in this boat’s demise. Now the question is, can the boat be salvaged, or is it lost for good to the ocean floor below?

Wow… That was a decent fishing boat!

Ski Boat Goes Full Submarine - This Can't Be Good For the Interior! 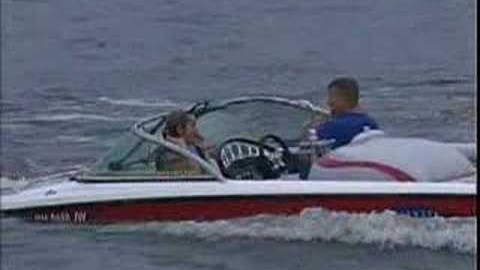