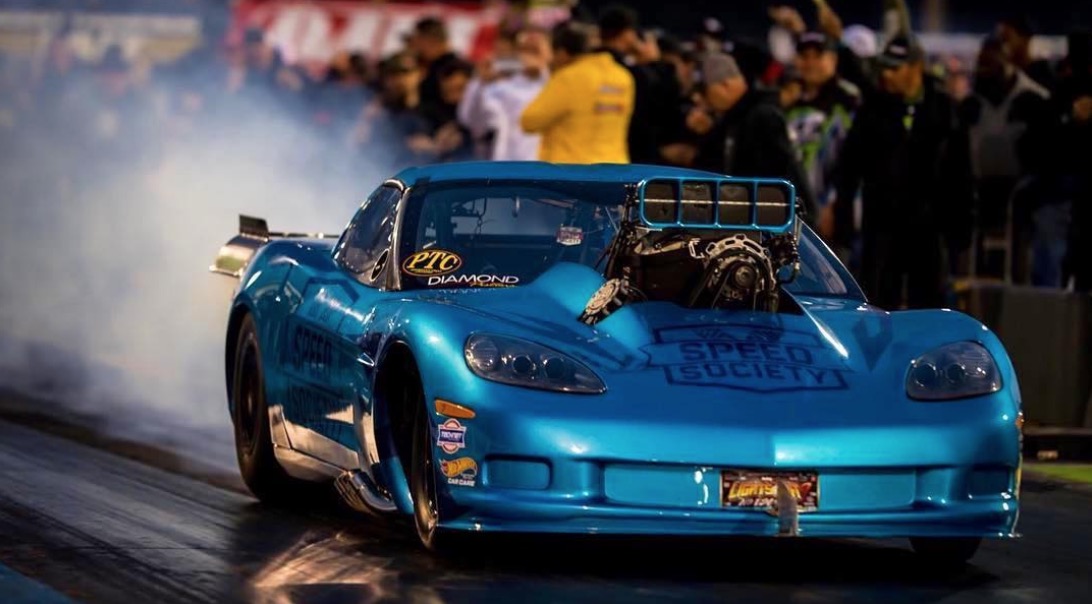 Alex Laughlin Wins Lights Out 10 On A Holeshot! Alex Laughlin was a man on a mission this weekend, rolling into the tenth running of Donald Long’s Lights Out radial extravaganza and leaving with all the cash, a cool trophy, and even more haters crying on social media.

Laughlin loaded up his Frankie Taylor-tuned C6 Corvette and made the trip to South Georgia Motorsports Park, where he and Taylor, along with crew chief/co-tuner/workhorse Jeremy Parsley pulled the car out of the trailer and immediately showed they were picking up right where they left off in September, when they fought their way to a runner-up finish at No Mercy 9. “This was my fourth radial tire event and every time we start the qualifying rounds, we play it safe and just try to make a moderate and clean pass to build from,” said Alex of the team’s revised plan of attack for Lights Out. “This time we decided not hold anything back and went for right off the bat. In the first round of qualifying we threw down a 3.69 at 200mph and became the first screw blower car to the 60’s. We later ran 3.65 at 207mph that placed number 4 overall in qualifying and also in the quickest and fastest field in radial tire history.”

With the ladder set, Alex began his march through the competition with a stout 3.692 to give him a first-round win over Tim Kincaid’s blown ’63 Corvette. From there, he would line up alongside Outlaw 10.5 competitor Mike Decker’s Camaro in the second round, where he used a 3.72 in the humid Georgia air to take the win and move to round three, where he would face a true icon of radial racing, Mark “Woody” Woodruff.

Woodruff would put up a hell of a fight, but his 3.68 would come up short against Alex’s 3.66 in one of the quickest side-by-side races in radial racing history. The win sent Alex to the semifinals against Kevin Rivenbark, who had made waves all weekend in his new ProCharged ProLine-powered Camaro. However, the pressure of not having a huge performance advantage over the car in the next lane got to Rivenbark, who turned on the red light and threw away a 3.66 that likely would have won against Laughlin’s slowing 3.72. Alex’s Vette ate the blower belt during the run, which led to the drop off in ET and the MPH being down nearly 10 from what the car usually runs on a full pass. With his lucky break out of the way, Laughlin looked to the finals, where he would face Daniel Pharris and his twin-turbocharged Pro Mod style Mustang. Pharris had been the most consistent car in eliminations all weekend, putting up a string of low 3.70’s and high 3.60’s that certainly proved he was not to be taken lightly.

The final round would be a driver’s race, with the cars both putting up 3.69 second elapsed times. Pharris had a great .015 reaction time but would leave second by over a hundredth to Laughlin’s .004 light. At the finish line, the cars would be separated by just seven-thousandths of a second, with Laughlin getting there first by a matter of inches.

Alex, Frankie, and Jeremy all pointed to the other two guys when it came time to give credit for the win, but they all three deserve a ton of credit for bringing home the $50,000 payday. “What’s unique about my team is there’s only 3 of us, Frankie, Jeremy and me. We don’t have the high end factory support, the crazy computer systems, no wheelie or traction control. We have the barebones antiquated mechanical fuel injection, some luck, and a lot of badass,” said Laughlin. “I raced a week ago in SoCal in NHRA Pro Stock, went to the semis there, then traveled across the country to South Georgia to win Lights Out 10 in my Hemi powered Corvette. Every single lap we made was a win light and we were up against the heaviest hitters of the class. I’ll be back to do it again a month from now for a shot at $101,000.”

We here at Speed Society also want to say a special thank you to Donald Long and his wife Stephanie and her father Steve, along with both their families and the entire SGMP staff and support crew for wrangling several hundred race cars and an estimated 15,000 spectators. While Duck X Productions events are known for being huge, each year they manage to add more and more to the overall experience, and still get the races finished on schedule, as long as there aren’t hurricanes intervening. They do a spectacular job of making these huge events feel as much like a family reunion as they do drag races, and that says a lot about the people behind the scenes. Look for the Speed Society team to roll into Sweet Sixteen II next month as one of the heavy favorites to take home the $101,000 purse and bragging rights!

In what may be the most memorable Radial vs. the World final in the 10-year history of Lights Out, Alex Laughlin takes out Daniel Pharris on a holeshot. Laughlin left first with a .004 light, Pharris a .015, and was able to hold off the hard-charging twin-turbo Mustang with a 3.694-second, 205.60mph pass in his screw-blown C6 Corvette to Pharris’ quicker-but-losing 3.690/211.13mph combination. #lightsoutx #fueltech