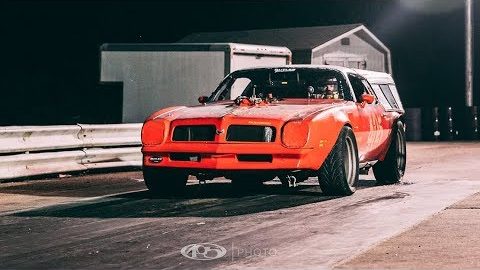 Street Outlaws stars Farmtruck and AZN kept the Farmbird – the car they built to go head-to-head with Aaron Kaufman for the Mega Race – as part of their arsenal of hotrods. Now that there are rumors of a second Mega Race, they’ve decided to upgrade the engine in the Team FNA-customized Firebird. This is their journey to get the new bullet installed and tested at Butler Performance Pontiac in Lawrenceburg, TN.

Butler Performance may sound familiar because they also build the twin turbo Pontiac that has powered Big Chief’s trilogy of Pontiacs on the show. They specialize in building the quickest Pontiac engines in the country and churn out some badass powerplants for their customers all around the country. Farmtruck and AZN pick up the car with the new engine already dropped between the fenders and head to nearby US43 Dragway to see how it it feels.

The car, which is admittedly set up to do a little bit of everything and not just run good in a straight line, makes a solid looking pass, but after the second run, the crew notices smoke coming from the car on the big end. Not wanting to haul it back to the 405 with a chance of the engine being wounded, they haul it back to Butler to have the team check and see what the cause of the smoke may have been.

They pull the valve covers off and inspect everything on the top side of the heads and run a camera into the cylinders to check the pistons of signs of damage. With no visible damage to the engine, they check the peripherals, where they discover the PCV had most likely been sucking up oil that was sloshing inside the engine at high RPM – the shift light wasn’t working, which caused Farmtruck to hit the rev limiter a couple of times on the first runs – and blow it into the exhaust, which led to the smoke show.

After making another test hit with no sign of smoke, they load up and shake hands with the Butler crew and start on the long haul back to Oklahoma, where there just may be a second Mega Race shaping up. Thanks to Lou from 405 Photo for the excellent footage!