Sometimes, we can’t help but look at a situation and scratch our heads. Either ...

Sometimes, we can’t help but look at a situation and scratch our heads. Either there’s something that we really missed here or someone is absolutely losing their mind stuck in quarantine. At the end of the day, I guess that’s one for the court of public opinion to rule on.

As quarantine continues on, people have found themselves going to some interesting measures for entertainment. As one might imagine, having a birthday party for a child isn’t necessarily something that’s all that possible. Anyone who has spent any reasonable amount of time around younger children realizes that social distancing definitely isn’t going to be an option if they gather.

Therefore, we have seen some people step in to help. From what we gather here, one youngster was forced to have their birthday alone, in quarantine. Therefore, the local car community rallied around the situation. They decided they wanted to jump in and help.

What would follow would be a massive parade of muscle cars in order to try and make this youngster’s birthday a little bit brighter. The parade would lead past the house and hopefully provide a moment of joy in a time that can be challenging.

As it turned out, though, one of the residents of the neighborhood didn’t see this as a positive thing. Instead, the woman came out into the street, yelling about what a big disturbance it all was. She even blocked the huge parade of cars from rolling down the street. It’s kind of hard to watch this video from Cars Across Texas and not get frustrated.

As time rolls on, the scene just gets crazier and crazier. Eventually, it looks like the drivers of the cars end up leaving the neighborhood by turning around because the woman refused to leave the street. At the end of it all, it would appear as if the woman ended up getting arrested for blocking traffic. The drivers, on the other hand, would return to the neighborhood.

At the end of the day, hopefully, the parade was effective in bringing a smile to a young person’s face. Hopefully, the massive scene didn’t ruin the child’s birthday.

Luxury Sedan In LA Decided He Didn't Like A Truck, Proceeded To Smash Into It. Arrested For Assault With a Deadly Weapon. 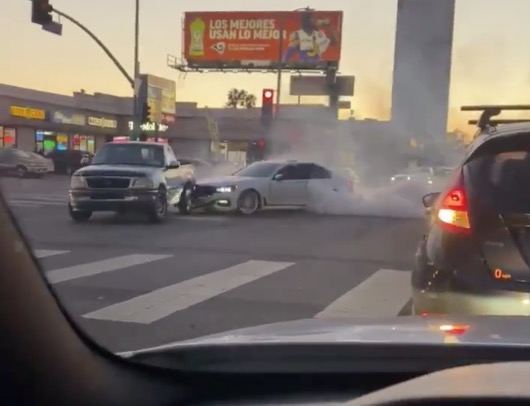