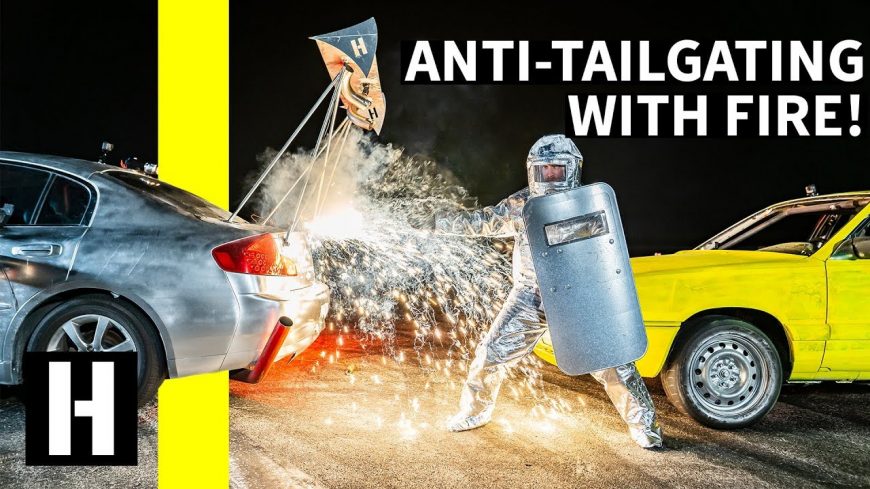 As a society, we disagree on a lot of things. Whether that comes in the forms of politics or religion is up to you. There aren’t a lot of concepts where we all get on the same page. However, I would venture to think that most folks probably would agree. Tailgaters are one of the most annoying types of drivers out there. We’ve all learned to love to hate them. After all, tailgating doesn’t really accomplish much of anything productive. Meanwhile, it puts both of the drivers in harm’s way.

As it turns out, the crew over at Hoonigan agrees with this sentiment that tailgaters are pretty scummy drivers. In order to battle off these folks who like to ride up on the bumper, they’ve devised a plan. They aren’t just sitting by and letting tailgaters take over the roadways but instead putting together all sorts of wacky ideas to fend them off. Last time, it was a whole conglomerate of bright LED lights that were designed to blind the people behind and discourage them from tailgating but this time, it’s a whole new level that’s been reached. We’re not sure what to make of this one.

By following along with the footage below, we get to see exactly what the situation looks like that has fireworks strapped to a car. The attempt here is to make it a little bit more of a deterrent in order to keep potential tailgaters away. Surely, we shouldn’t have to try to slap the “do not try this at home” warning on this one but inevitably, if we don’t, there’s someone who is going to try it out. Let’s try to enjoy this one from the safe side of the screen, boys and girls. Besides, it’s going to be hard to top this one.