When you hear about an engine, you can learn about all the specifications until ...

When you hear about an engine, you can learn about all the specifications until you’re blue in the face. However, being able to visualize and actually seeing it are two entirely different concepts as you can probably imagine. I mean, without a special display, you can’t really necessarily see all that’s going on inside of a certain engine. That’s why, with displays like the one that Audi had put on at the Geneva Motor Show, it’s pretty fascinating to be able to take a close and hard look at exactly what’s making cars like the V10 powered R8 tick.

Thanks to the people at Audi and the display that they set up at the show, we’re able to take a cutaway look at their V10 engine that you’ll find under the hood of the R8 and also the S Tronic transmission that shifts that power and transfers it to the tires, eventually getting all of that horsepower down the road so that you can make the most of it when you’re behind the wheel of Audi’s flagship supercar. It’s pretty neat to see as the whole thing comes to life and pops to life!

If you follow along down in the video below, you really get the full scoop of what exactly this engine looks like while it’s in motion. Displays like this end up being special because they’re simply impossible to see in the real world as you need a custom setup like this to be able to appreciate them. After seeing this one, you’ll really be able to get a grip on what it is that makes these engines so special and how they function as you see the powerful machine that lies under the hood rocketing down the track or street near you.

How to Scare Grandma With an Audi R8! 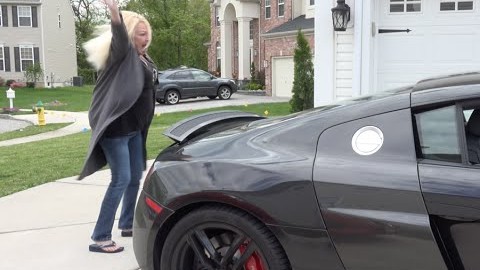