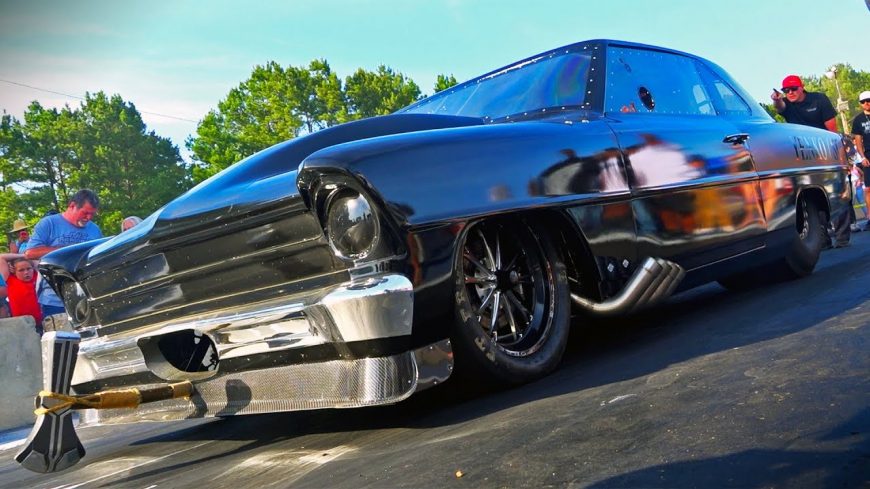 When it’s time to debut a new car, sometimes, things don’t exactly go as according plan. There are a lot of different adjustments to make a car perfect. These adjustments usually take time to come together. Sure, someone can do a lot of testing. However, as we have seen before, testing doesn’t always guarantee a desirable result. It can be a real struggle to get to the top.

For Axman, though, the debut of his new car would be anything but a struggle.

As we knew Axman in the past, he was a force in the no time/small tire world. However, he has decided to move over to no prep/street world where his old car was still competitive. It seems like he thought that he could do better, though. With that, he decided that he would throw a new car in the mix with a longer wheelbase that would crank up the competitive level even more.

Based on the car’s initial outing, oh boy was he right!

This time, the crew from The Racing Vids takes us to the scene of the action. We watch, trackside, as Axman debuts his new Chevrolet Nova at the JJ DaBoss Arm Drop Race in Arkansas. Not only did the car have a strong showing. It also managed to go undefeated throughout the entirety of the weekend. How’s that for a debut!?

By following along with the video below, we’re taken to the scene of the action to see this beauty make its presence felt. With such a strong initial showing, it’s only going to get better from here. If this is how good the car is running in its first outing, just imagine how well it’ll do with a little bit more time to develop. It certainly isn’t going to get worse as the tuner has access to more data!

If this one wasn’t already on your radar, we would certainly recommend that you put it there quickly.

« Jay Leno Surprises Man With Cancer, Gives Him a Ride in the C8 Corvette