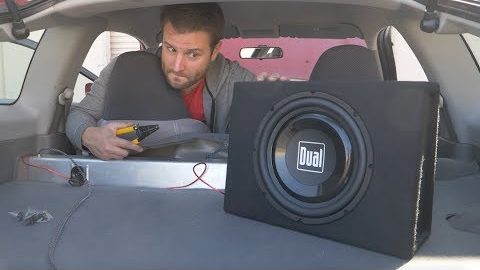 For any realistic person who plans on building a vehicle, they have to really pick their battles. I mean, it would be incredibly nice to be able to ball out on every single purchase, picking out top-of-the-line everything to make your car exactly the way that you like it but, down here in reality, most people who start tooling with their vehicle, even a vehicle for pleasure, are more likely than not going to try to have to figure out how to go for a budget on some things instead of just running up their credit card every neat little gadget that they see.

Maybe one day, eventually, after you’ve been building your car for years, you’ll be able to piece together all of the parts that you want but in the meantime, especially for someone who’s more focused on performance, maybe something like the audio system is somewhere that someone building a car might try and save a little bit of money on. Last time, Rob Dahm went out and did a little experiment, heading to the local Walmart to spend $20 to pick up a set speakers that seemed to do alright. This time, he’d going in deeper!

If you follow along down in the video below, you’ll be able to check out Rob Dahm’s journey as he attempts to beef up the entertainment factor brought to him by his daily driven vehicle, an old Honda Fit that, while it might maintain some desirable qualities to make it a car that’s decent to drive every day, others like the sound system, in this situation, simply just don’t live up to what he wants them to be. Could a cheap subwoofer add to the cheap speakers that began to fix that problem or will Rob find himself spending even more money to buy additional sound equipment in the future? The video below will help you to explore that concept just a little bit deeper.