Sometimes, even for the most desirable of cars, they don’t meet their storybook ...

Sometimes, even for the most desirable of cars, they don’t meet their storybook ending. However, every once in a while, a car does end up slipping toward oblivion but manages to be saved. Most times, though, once the rust starts to appear, it will eventually consume the vehicle as it rots into the ground.

This time, we tune in to learn about the story of a 1969 Dodge Charger that would eventually be saved. With a little persistence and the right approach, the classic would have a second chance at life.

Oddly enough, the story all revolves around a couple of cases of beer. Back in the day, Indiana was a dry state. In order to remedy his demand for beer without a supply, he would drive over to Ohio. This was when he would spot a 1970 Dodge Charger.

After stopping by a couple of times to inquire about the car, it seemed as if the owner wouldn’t sell. One day, though the 70 was gone and a 69 R/T would sit in its place. Naturally, the curious muscle car enthusiast had to ask about the newfound muscle machine. Just like its predecessor, the 69 also wasn’t for sale. From the sound of things, its owner might’ve even been getting a little bit angry about being approached by the man looking to buy the car.

This was when the muscle machine enthusiast approached the car owner at his fireworks stand with the owner’s wife. Granted that it was a busy place, the buyer figured he would get a friendlier response. Another factor that could help is that the man’s wife was nearby. Our purchaser decided to voice his offer loudly within earshot of the man’s wife. This is when she got on him to sell the car and it eventually actually happened.

Below, we learn all about the machine and how it eventually changed hands. We get a feeling that the old school muscle car just found a new lease on life! – #ratmusclecarz 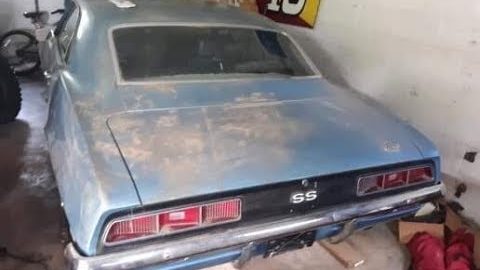