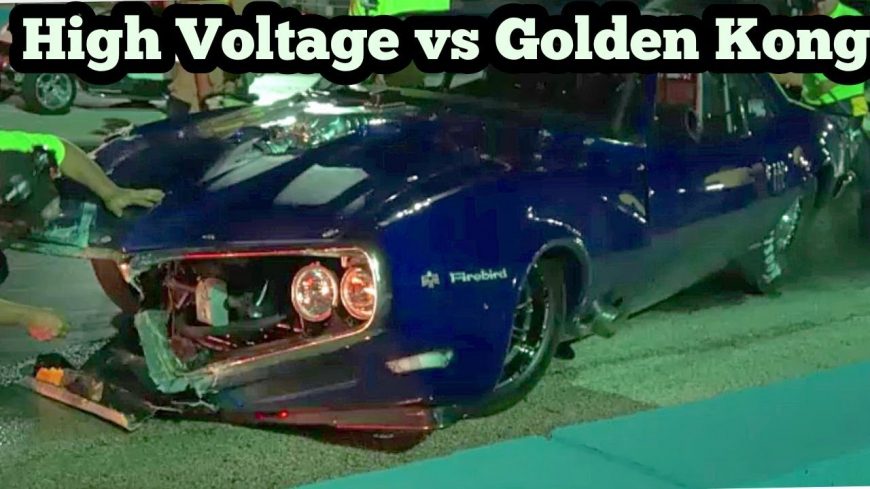 This video is hard to watch, especially for those of us who love classic American muscle cars. Robin Roberts built this gorgeous First Generation Pontiac Firebird, known as High Voltage, to run with the baddest cars in the no prep world. We’ve seen Roberts and High Voltage lay down some killer runs on sketchy tracks all across the country, but it looks like it will be a while before we see him back on the track.

This past weekend, Project X Promotions held their annual Bounty Hunters no prep at Alamo City Motorplex, an event known for its extra-tricky surface and insanely high horsepower hotrods. Roberts would find himself lined up with no prep newcomer Daniel Pharris in Dewayne Mills’ Golden Kong Camaro, and with both cars being powered by twin turbocharge ProLine powerplants, everybody on the property expected this to be a knock-down, drag-out fight to the finish.

What nobody expected was for Roberts to get crossed up and nose his gorgeous ‘Bird into the wall, but after trying his best to correct from getting out of shape early in the run, that’s exactly what happened. You can see in this video from National No Prep Racing Association, Robin was crossed up and having to drive the car hard almost as soon as he left the starting line. With the extremely slick track beneath him doing little to help regain control, Roberts fought the car valiantly, but ended up sliding across the track behind Pharris and slamming nose first into the left side retaining wall.

The car bounced back off the wall and came to rest awkwardly across the left lane, with heavy front end damage. Roberts, thankfully, was uninjured in the incident, and almost certainly has already started sourcing parts to rebuild the ‘Bird. We’re thankful for good safety products and strong chassis, which allowed Roberts to emerge safely following this hard hit.

« An Engine Table Like Never Before – This One Fires Up And Runs!